His Wife Said No To World Cup Trip. So, Friends Took His Cutout To Russia 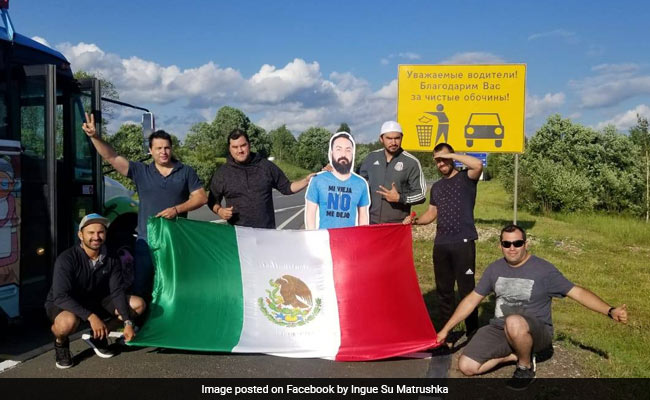 A bunch of football fans attending the FIFA World Cup 2018 have found the perfect way to troll their friend. And their method has attracted major attention of social media. Four friends from Mexico are posing all over Russia with a cardboard cutout of their friend who couldn't join them - thanks to his wife. Internet is flooded with pictures of the men posing with the cutout that shows their friend dressed in a T-shirt that reportedly says 'My wife didn't let me go'.

The men run a special Facebook page and have been sharing posts about their escapades in Russia - almost all of them with their cutout friend in tow. The five friends had planned to travel to Russia together but one of them, Javier, told them he couldn't go at the last minute. According to reports, Javier's wife didn't let him go, after all. But the remaining four friends decided to bring him along anyway... well, almost.


According to DailyMail, the friends from Durango, Mexico, had been planning a road-trip to Russia since the 2014 World Cup and also been saving for it. They even purchased an old school bus, gave it a makeover and made necessary bookings on a ship that would take them there.

The group of friends - including Javier's cutout - reached Moscow on June 13. They've been sharing the most amazing updates from their adventures. And the cardboard cutout of Javier has been included in almost all the fun activities - from drinking beer to attending concerts and posing with football fans from all over the world.


What do you think of these friends? Tell us using the comments section.Click for more trending news