Man Tries To Kiss Reporter On Live TV. Her Reaction Has Internet Cheering

She immediately ducked to avoid the man and gave him a piece of her mind while the camera still rolled. And now the Internet is all praise. 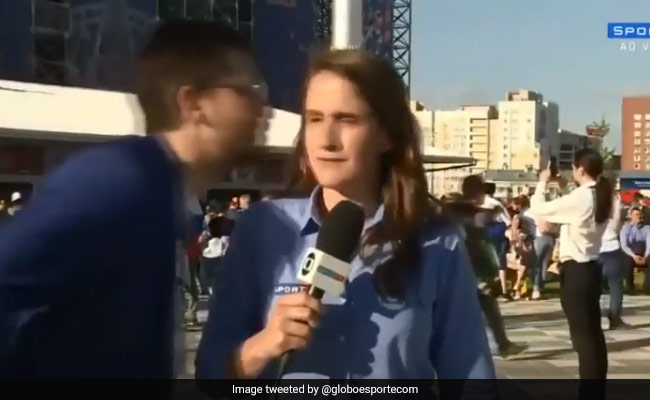 A Brazilian sports journalist is being praised online for giving it back to the man who tried to kiss her while she was reporting live from the World Cup. Julia Guimaraes from TV Globo and SportTV was reporting live from Yekaterinburg in Russia before the Japan vs Senegal game when a man leaned in to kiss her on the cheek as she spoke to the camera.

She immediately ducked to avoid the man and gave him a piece of her mind while the camera still rolled.

The channel posted the clip to highlight the incident

The reporter took to Twitter and said, "It's hard to find the words ... Luckily, I have never experienced this in Brazil. Over here it has happened twice. Sad! Shameful!"

Promoted
Listen to the latest songs, only on JioSaavn.com
The journalist claimed she was also harassed during the opening game of the World Cup between Russia and Egypt in Moscow. She added that she had also been at the receiving end of unwanted attention, ranging from aggressive looks to offensive songs in Russia.

The clip soon began circulating on Twitter where people praised her for her firm yet restrained response to the man.

Great response from Brazilian TV journalist Julia Guimaraes of Sportv to unacceptable behaviour. Not easy to show such restraint in the face of harassment. pic.twitter.com/eFVZz6gdMA

suddenly I feel this deep love for Julia Guimaraes and I'm not sure who she is https://t.co/QSuKKWXuGo

Retweet the heck out of this, well played Julia Guimaraes https://t.co/JuXfgRhPIm

This, however isn't the first such instance at World Cup. Recently, a German TV correspondent, Julieth Gonzales Theran, was groped on air by a Russian fan in the city of Saransk. After widespread condemnation, including from the channel, the fan apologised to the correspondent.Click for more trending news