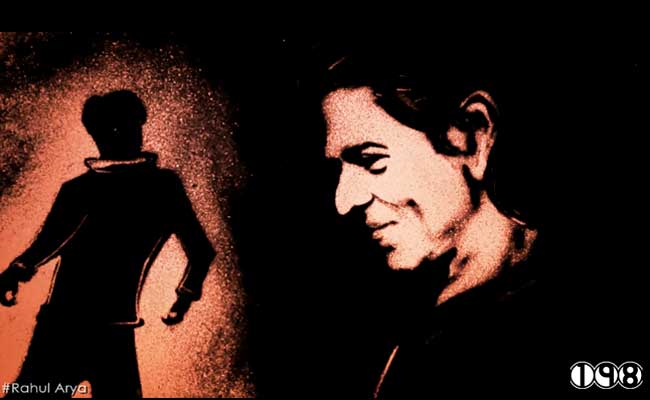 Actor Shah Rukh Khan may be playing the character of a 'Jabra Fan' for reel but out in the real world, King Khan's popularity is unparalleled and he has more than a few million fans of his own. One of those fans has paid a beautiful tribute to the superstar.

Sand artist Rahul Arya has shared a stunning video that journeys through the 50 years of the actor's life, from when he was a regular Delhi boy to the time he became the Badshah of Bollywood. In all of 200 seconds and with the help of some sand, Mr Arya retells SRK's wonderful story.

Through his artwork, Mr Arya shows us key moments from Shah Rukh's life - early days in school, college, his first acting role, clips from his best films and milestones the superstar has achieved. Fauji, Deewana, Darr, Dilwale Dulhania Le Jayenge, Kuch Kuch Hota Hai, Devdas, My Name is Khan -  you name the film and Mr Arya has found has found a way to depict it through his sand art. There are also sound bites from Shah Rukh's interviews and dialogues from his films that act as the background score for the tribute.

The video makes for such an incredible watch that even Shah Rukh praised and thanked the artist, writing in a tweet: "Thank you. Makes me want to work harder when I see my life flashing past me and I still have enough to create more."

Take a look at video below: