"That is absolutely disgusting" 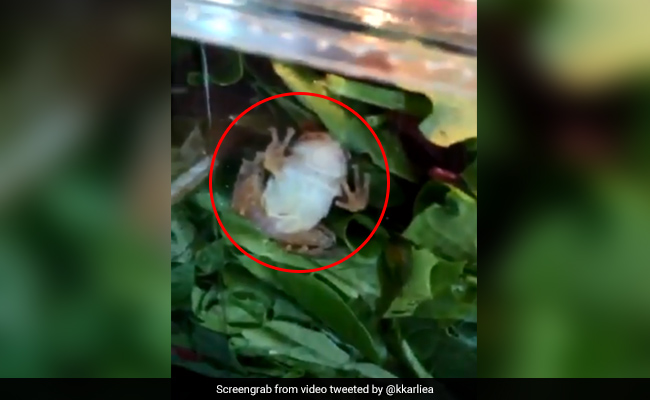 A family recently found a live frog in their box of lettuce.

A video that is being widely circulated online will ensure that you take a closer look at all the salads you eat. Shared on Twitter by Karlie Allen, it shows the moment a family discovered a live frog in a box of lettuce.

According to TMJ 4, the Allen family in North Shore, Wisconsin, had picked up the pack of lettuce from a brand called Simple Truth. They were making dinner when they saw the frog inside the box.

"I'm across the room and I hear a shriek and a thud," Karlie Allen said to TMJ 4.

When she went to investigate and saw the frog, she pulled out her phone and began to film the bizarre scene. "I'm thinking one, how the heck did that get in there, and two, that is absolutely disgusting," said Ms Allen.

"Bon appetit! Nothing like salad with a side of live frog," she wrote on Twitter while sharing the video.

bon appetit! nothin like salad with a side of live frog 🐸 @SimpleTruth4Upic.twitter.com/KG9bPjotZ9

Since being shared on Wednesday, her video has been viewed over 9,000 times and has collected a number of shocked comments.

"So gross!" wrote one person in response to the video. "Always wash your food," said another.

Simple Truth apologised for the incident in a tweet and said: "Yikes! We are so sorry that you discovered a live frog in the Simple Truth product."

TMJ 4 reports that the Allen family had planned to return the box of lettuce and the frog, but it escaped overnight.

Why A Bakery Customer Spent $1,000 On A Single Doughnut