"Even Einstien was rejected initially. His Theory of Relativity was rejected as being much less Physics, more Art!" wrote Shekhar Kapur. 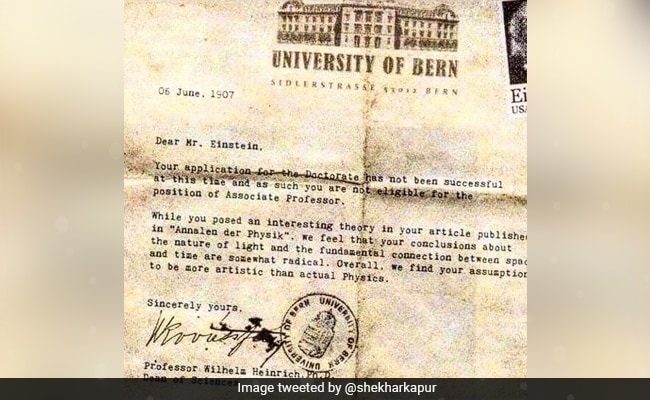 A picture of the letter shared by Shekhar Kapur.

Filmmaker Shekhar Kapur posted a motivational message on Twitter this morning, urging his followers to have "passion and perseverance" and offering the example of Albert Einstein who, he wrote, was once rejected by the University of Bern. Mr Kapur even shared the rejection letter from the university, dated 1907, which purportedly denied Mr Einstein a position as an associate professor. But is the letter real?

The letter is nothing more than a forgery.

Typed onto a yellowed piece of paper, the fake letter from the University of Bern informed Albert Einstein that his doctoral application had not been successful. It went on to criticise his now-famous theory of relativity as "more artistic than actual physics". The letter was signed by Prof Wilhelm Heinrich, dean of the Faculty of Philosophy and Natural Sciences of the University of Bern

"Even Einstien was rejected initially. His Theory of Relativity was rejected as being much less Physics, more Art!" wrote Mr Kapur while sharing the letter

Lessons of Life : if you believe in yourself, have passion and perseverence, you will achieve your goals. Even Einstien was rejected initially. His Theory of Relativiry was rejected as being much less Physics, more Art ! pic.twitter.com/1SusjdMZgg

Many Twitter users rushed to inform the National Award-winning director that the letter is actually fake.

The fake letter has, in fact, been in circulation for a few years now, and Mr Kapur is not the first one to fall for it. In 2018, Congress MP Shashi Tharoor had shared the pic too - and later posted an update admitting that he had fallen for a fake letter.

For all those smarting from rejection: those in power today (&in a position to judge you) will not necessarily be proven right tomorrow. And their judgement of you might look downright silly.... pic.twitter.com/jiDzjbaRyt

So what makes it clear that the letter is not real?

Firstly, the fact that it is written in English. The University of Bern is located in Switzerland, where German is the predominant language. Albert Einstein himself was born in Germany and published his academic work in German. It is highly unlikely that the university would have sent German-speaking Mr Einstein a letter in English.

Moreover, according to fact-checking website Snopes, the letter references the modern postal code for Bern - 3012. A letter written in 1907, however, would not have used that, as Switzerland did not adopt the four-digit postal code system until the 1960s.

In 2016, the University of Bern had attempted to clear the air around the letter through an article published in their online magazine.

Niklaus Butikofer, archivist of the University of Bern, clarified that the letter is a "relatively crude forgery" and said that not much effort had been put into making it a believable one either.

In the article, the university also said that there has "never been a dean - and not even a lecturer - named Wilhelm Heinrich at the University of Bern."