"Tesla is a wonderful dog," wrote one person in the comments section. 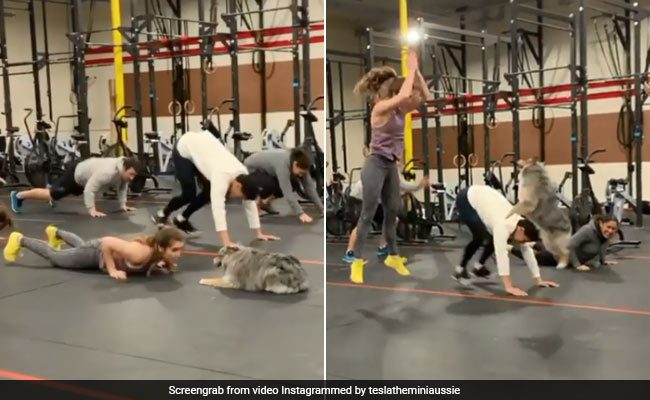 Tesla the mini Australian Shepherd is inspiring people with her exercise videos.

If you find it hard to motivate yourself to hit the gym every day, this video may be all the fitness inspiration you need. The video, that has taken social media by storm, shows a mini Australian Shepherd 'teaching' an exercise class.

On January 10, the dog, named Tesla, displayed her CrossFit skills in a video posted on Instagram. The video eventually made its way to Twitter, where it has gone viral with millions of views and thousands of comments.

The video was reposted on the popular Twitter account 'Aussies Doing Things'. Filmed inside a gym, it shows a group of people following Tesla as she rolls and jumps at the front of the class. Tesla's leadership skills even earn her a treat at the end of the class.

Meet Tesla. She just started a new job this week as a CrossFit Instructor. pic.twitter.com/UjzemZaUaV

The video has collected over 4.2 million views on Twitter, and another 92,000 on Instagram where it was originally posted. It has also been inundated with admiring comments from delighted viewers.

Why isn't the class doing the rolling? 🤔

Even if I were fit enough to participate in that, I think I'd be incapacitated by laughing so much.

Tesla is a wonderful dog!!

Six-year-old Tesla's Instagram is full of videos that show her working out and playing with her humans.

She can even do a wall stand!

What do you think of Tesla's exercise class? Let us know using the comments section.