"Their teeth, like pointed shards of glass, are transparent and their large mouth is capable of sucking up and swallowing prey the size of their own body." 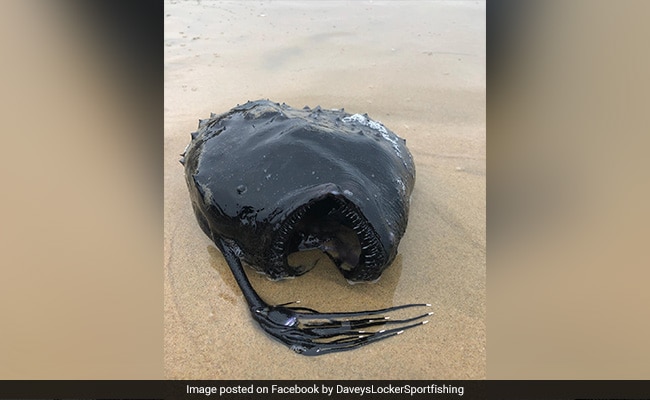 A deep-sea Pacific footballfish was found on California's Newport Beach on Friday.

A beachgoer came across a decidedly rare sight while out for a morning stroll on California's Newport Beach on Friday. Ben Estes spotted a strange-looking, all-black fish washed up on the beach. According to NBC News, he came across the deep sea creature lying on the sand at Crystal Cove State Park and alerted park rangers about his find.

Davey's Locker Sportfishing & Whale Watching, a boat tour agency that operates in the area, said in a Facebook post that the deep sea creature was identified as a deep sea Pacific footballfish, which is a species of anglerfish.

While the fish itself is not rare, the Facebook post added, it is rare to come across a deep sea specimen intact on a beach.

The Facebook post, shared on Sunday, has gone viral with over 1.8 lakh shares and thousands of comments.

"This is terrifying, and super cool, but also concerning that a fish that belongs so far underwater has washed up on shore," wrote one person. "It's the fish off of Finding Nemo with the bulb in front of it," another said.

The Crystal Cove State Park confirmed the find in a Facebook post shared Monday and shared further details about the "incredible" discovery. Describing the fish, the state park wrote: "This particular fish is most likely the Pacific Football Fish. Only females possess a long stalk on the head with bioluminescent tips used as a lure to entice prey in the darkness of waters as deep as 3,000 feet!"

"Their teeth, like pointed shards of glass, are transparent and their large mouth is capable of sucking up and swallowing prey the size of their own body," the state park added.

It is not clear how the 18-inch deep sea fish washed up on the beach. It is currently in the custody of California Department of Fish & Wildlife.

The world's oceans remain one of the most underexplored places known to humans. Here is a look at 10 mysterious deep sea creatures that reside in the depths of the oceans.