Nik Wallenda walked over the active Masaya Volcano in Nicaragua. 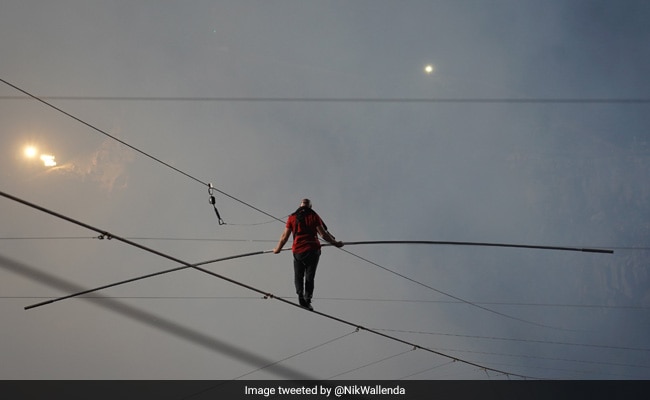 Nik Wallenda walked over an active volcano in Nicaragua.

Nik Wallenda has made history by becoming the first person to walk on a high wire directly over an active volcano. The tightrope walker - a seventh generation performer from the famous Flying Wallenda circus family - walked over the active Masaya Volcano in Nicaragua for his latest high wire act on Wednesday.

According to USA Today, several airborne and ground cameras tracked the daredevil as he braved hot lava for the gravity-defying stunt. Mr Wallenda took just over 31 minutes to walk 1,800 feet with a "lake of red magma" churning below him.

For the record-breaking stunt, the 41-year-old wore a harness, eye goggles and a gas mask to protect his lungs from the noxious fumes of the volcano. His shoes were designed with thicker soles to help cut possible heat coming from the volcano.

Videos he shared on Twitter show him performing the hair-raising stunt:

What would you be thinking if you were in Nik's shoes right now? #VolcanoLivewithNikWallendapic.twitter.com/uXFQH2ujWD

According to ABC News, who televised the stunt live, Mr Wallenda described the walk as "mesmerizing".

"It was amazing...just being able to see that volcanic lava down there was absolutely mesmerizing," he said. "It's unexplainable."

He also said it was worse than his walk over the Grand Canyon, as he had to battle strong winds. "They were unpredictable," Mr Wallenda said of the winds. "There was a time when I was taking a step and I felt like I got knocked back."

In June last year, in another hair-raising stunt, Nik Wallenda and his sister Lijana had walked a wire strung 25 stories over New York's Times Square.