Pusha the cat, her kittens and the baby squirrels live as one happy family 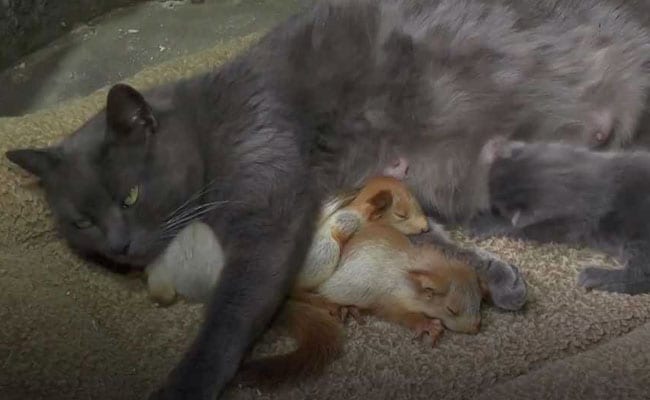 A cat in Crimea has adopted four orphaned baby squirrels.

A cat at a petting zoo in Crimea has adopted four orphaned baby squirrels, making people around the world go "aww". Pusha the cat had just given birth when a visitor to the Bakhchisaray Miniature Park turned the baby squirrels over to the staff, after finding them without a mother.

"On one beautiful day, visitors brought us these wonderful squirrels in a box. At that time, our cat had just given birth," said Olga Fateeva, an employee of the park, to Ruptly.

"We decided to introduce them to her and she accepted them."

BBC reports, however, that it wasn't love at first sight for the squirrels, who were initially afraid of their foster mother.

But not so anymore.

Today, Pusha the cat, her kittens and the baby squirrels live as one happy family, playing and snuggling together. "They sleep together, follow each other, climb, and fight over milk," says Olga.

According to NBC, since Pusha sometimes struggles to produce enough milk for her kittens and her adopted squirrels, zoo staff help her out by supplementing with goat's milk in tiny bottles.