It's A Boy! Critically Endangered Western Lowland Gorilla Born In US Zoo

Calaya, a 15-year-old western lowland gorilla who lives at Washington DC's National Zoo, gave birth to her first offspring, a male named Moke, which means "junior" or "little one" in the Lingala language of Africa. 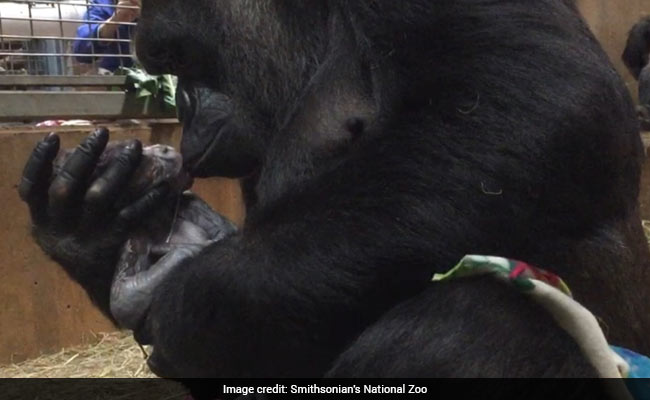 Calaya, a western lowland gorilla, was filmed giving birth to her first offspring at the National Zoo

Washington: Becky Malinsky was on duty in the National Zoo's Great Ape House a little after 1 p.m. Sunday when she decided to check on the zoo's very pregnant western lowland gorilla, Calaya.

Malinsky, the assistant curator of primates, noticed that Calaya looked restless and uncomfortable, and then she saw the animal's water break. Malinsky got on the phone with her supervisor: "I think this is something," she said.

For the next five hours, keepers and curators at the zoo watched, and filmed, the 15-year-old gorilla endure labor and then give birth to her first offspring, a male named Moke (pronounced Mo-KEY), which means "junior" or "little one" in the Lingala language of Africa.

Members of the zoo staff said it was an amazing event. The zoo's other gorillas hovered nearby. And after the baby was born, his 450-pound father, Baraka, uttered a "pleasure rumble," a sign of contentment, the zoo said.

"I never thought I would get to witness a gorilla baby being born," Malinsky said Monday. "Quite incredible."

"We all saw everything. We saw the birth. We saw the five hours of labor. . . . We were all kind of shaking a little with happiness. It was an amazing moment to share with the team. We were all really close to tears."

The baby, the first such gorilla born at the zoo in nine years, arrived at 6:25 p.m. Video footage shows Calaya cradling him in her huge hands and cleaning him seconds after he was born.

Bastian said the staff watched as Calaya's birth contractions became more frequent, and she picked up a blanket at several points, as if for help.

"She was doing a lot of pacing and walking around," she said. "She grabbed lots of blankets. . . . She would wrap herself in them. She would use them to brace herself a little bit as she was pushing."

Baraka, the father, is a hulking "silverback," so called because of the gray hair on his broad back. He "stayed in the room with her, but was at a respectful distance," Bastian said.

The two adult gorillas have been a power couple since Calaya arrived three years ago.

Baraka is 26. Calaya weighs about 205 pounds and is the dominant female in her group.

The zoo has six gorillas. A gorilla's gestation period is 71/2 to eight months. The ape house was closed Monday. Officials said they were not sure when it would reopen.

Calaya was initially on birth-control pills when she arrived at the zoo in 2015 from Seattle's Woodland Park Zoo.

"We let her come and get acclimated to the group, kind of figure out what her position would be," Melba Brown, her chief trainer, said recently. "Once we were certain her health was in the perfect state to have a pregnancy, we took her off birth-control pills."

She became pregnant in August. The zoo verified that using a standard human pregnancy test.

Calaya and Baraka hit it off right away, Malinsky said recently, and they mated within an hour of meeting. "It was love at first sight," she said.

Even before they met, when he could only gaze at her from behind the glass of the enclosure where she was temporarily quarantined, she caught his eye.

"We're pretty certain that Baraka was taken by her, just based on his behaviors," Malinsky said.

She said keepers decided to introduce her to him first.

"It was a very smooth introduction," she said.

This was in 2015, while she was still on birth control, but it was promising for the future.

Keepers were not sure how Calaya would react to her baby. "She's very new at this," Brown said.

But Brown has done maternal training with her using a stuffed gorilla toy standing in for her baby.

"So she knows what it means to kiss her baby, to touch her baby and to feed her baby," Brown said recently. And on Monday, Calaya was cradling and nursing the baby appropriately, Bastian said.

As for Baraka, "he has an extremely playful side," Brown said.

"He knows where everybody is," she said. And he comports himself well. And with the newborn, he will be involved.

"This is his family," Brown said.

Promoted
Listen to the latest songs, only on JioSaavn.com
https://wapo.st/2qCSoXr