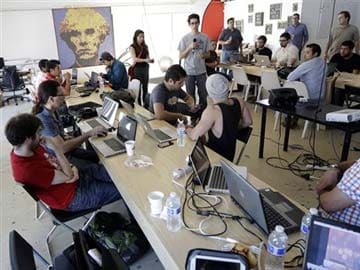 Raul Moas, executive director of the nonprofit organization Roots of Hope, center, rear, addresses a group during a "Hackathon for Cuba" event run by Roots of Hope.

San Jose: It used to be that "hacking" was just a type of crime, a computer break-in. But today, the term is also part of a growing - and perfectly legal - mainstay of the tech sector.

Computer programming competitions known as "hackathons" have spread like viruses in recent years as ways for geeks, nerds and designers to get together to eat pizza, lose sleep and create something new.

The formal, marathon group brainstorming sessions are focused on everything from developing lucrative apps to using computer code to solve the world's problems. This year a record 1,500 hackathons are planned around the globe, up from just a handful in 2010.

"A hackathon is the fastest way to actually do something about an idea," said Nima Adelkhani, organizer of the weekend-long Hack for Peace in the Middle East competition in San Francisco this month.

Law enforcement hasn't abandoned the term. Dozens of federally convicted "hackers" are serving prison sentences for computer fraud and other cybercrimes. And the Justice Department's cybercrime budget this year is $9 million to target offenses that include "hacking."

But the new uses have popped up with increasing frequency since a pair of tech events in 1999 where developers worked together to write programs. Yahoo gets recognition for the first official hackathon in 2005. And Facebook CEO Mark Zuckerberg has been largely credited with helping broaden the definitions by urging his staff to "hack" by "building something quickly or testing the boundaries of what can be done."

A new Facebook option that went live Thursday allowing users more than 50 ways to identify their gender beyond male and female was conceived during a company hackathon four months ago.

This month, the first global hackathon for Black Male Achievement was held in Oakland, California. Music Hack Day is coming in Tokyo and Hackomotive competitors will develop apps in Santa Monica, California., that make it easier to buy and sell cars.

During these sorts of tech-heavy, weekend competitions, teams of computer programmers, software engineers and developers huddle over monitors for hours, working up new apps for smartphones or other devices. A panel of judges selects winners, and prizes are usually awarded.

"Developers are a rare breed where they get paid a lot of money to do this job during the week, and they enjoy it so much they want to do it more on the weekend," said Jon Gotfriend, who's been going to hackathons for more than three years.

As such events have become more popular, a set of rules has coalesced. Teams are typically made up of a handful of people. Designs, ideas and even mock-ups can be worked on in advance, but everyone starts writing code at the same time. And teams own whatever they come up with.

The opening stages of a hackathon can be exciting as challenges, prizes, teams and judges are introduced. But within hours there's a quiet buzz and lots of keyboard clicking as programmers make their ideas a reality.

Participants arrive with sleeping bags, deodorant, toothbrushes, pillows and laptops. By morning's wee hours, pizza, energy drinks and bean bag chairs are in hot demand. Candy of all kinds is consumed, and by the time the buzzer goes off after 24 or 48 hours, most participants are dishevelled and a little loopy.

Like the tech industry itself, hackathon participants are mostly men. But some organizers are trying to change that.

There was an unusually high number of women at a hackathon at the AT&T Developer Summit in Las Vegas last month after organizers promised $10,000 extra to any team with a majority of females. It worked; both winning teams were led by women. But in every other way, the event was typical.

"There are just four important things you need for a hackathon: food, wifi, power and people," said hackathon aficionado Mike Swift. "When you have those, people want to build together."

Swift went to his first hackathon in 2010. At an event a few months later, he and his friends created Hacker League, a program that helps organizers coordinate their events online. "Since then hackathons have totally exploded," he said. In December, Intel purchased Hacker League for an undisclosed amount.

Another well-known hackathon success story is GroupMe, a free online chat program inspired by a project conceived during a New York competition in 2010 and acquired by Skype in a reported $85 million deal.

But as these think sessions have grown from dorm room all-nighters to high-stakes events, problems have arisen.

In December, San Francisco-based Salesforce.com took heavy criticism from participants after it awarded a $1 million hackathon prize - the largest such reward to date - to a former employee who had used pre-existing code during the competition.

After reviewing the rules and judging process, the firm decided that though the prize winners didn't violate rules, they were going to choose a second team to also win the $1 million grand prize and declared the competition a tie.

"We heard feedback loud and clear," wrote Salesforce vice president Adam Seligman in a note to participants. "We didn't get this right. We should have been clearer."

Promoted
Listen to the latest songs, only on JioSaavn.com
Still, Seligman said the company intends hold more hackathons, using an outside firm to execute them. He said, "We want you to make awesome stuff and make money."