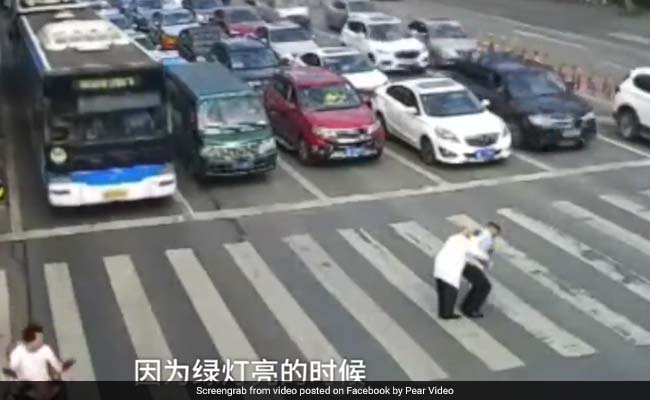 Chinese social media is buzzing with adulation for a traffic policeman who came to the aid of an elderly man struggling to cross a busy intersection in China. The policeman gave the man a piggyback ride across the road to help him get to the other side.

Surveillance footage from an intersection in China's Sichuan province shows the senior citizen walking across a six-lane road with the help of what appears to be two walking sticks. Midway through the zebra crossing, the lights appear to turn green and vehicles begin moving. Seeing the man stranded in the middle of the road through moving traffic, a policeman appears. After a brief chat with the elderly man, the most heartwarming scene plays out.

The policeman picks up the man on his back and gives him a piggyback ride across the road. Some drivers even wait for the two to get to the other side.

Promoted
Listen to the latest songs, only on JioSaavn.com
The helpful policeman was identified as Qin Weijie, a traffic cop with Mianyang Traffic Police in Sichuan, reported Sydney Morning Herald. The moving video - originally shared by the department on Weibo, China's equivalent of Twitter - made it to news channels in China and ultimately to several video platforms across the globe.

There have been similar heartwarming displays of cops going beyond their call of duty to help citizens. In a video from last year, also from Sichuan province, a policeman stopped his car in the middle of an intersection to block oncoming traffic - all so an elderly woman could cross the street. After parking his car, the cop disappeared and emerged a few seconds later holding an old man's hand.Click for more trending news