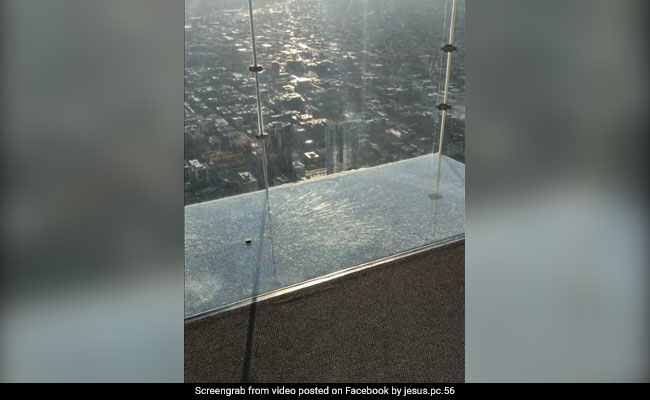 A video shows cracks on the glass deck of Chicago's Willis Tower.

Visitors to the see-through glass observation deck in Chicago's Willis Tower were in for a rude shock when the protective layer covering the glass beneath their feet began to crack. The glass enclosure on the 103rd floor of the tower, known as the Skydeck, allows visitors to observe the city from 1,353-feet above the ground. On Monday, however, the attraction's protective layer covering the glass splintered into thousands of pieces, reports CNN.

Terri Cornelius, a spokeswoman for Willis Tower, told NBC Chicago the cracks happened in a protective layer on the ledge, adding that none of the visitors were ever in any danger.

"The protective coating which acts like a screen protector for the Ledge experienced some minor cracking," a spokesperson for the Willis Tower told USA Today. "No one was ever in danger and the Ledge was immediately closed.

Chicago-area resident Jesus Pintado, who was at the spot when the incident occurred, told NBC Chicago that he heard a loud "boom" while waiting in line. He added that the people standing on the deck turned pale when the cracks appeared.

Mr Pintado also shared a video of the splintered Skydeck ledge on Facebook, where it has been viewed over seven lakh times.

According to its website, the Skydeck was first opened in 1974, and the glass observation ledge added later. CNN reports the ledge is designed to hold up to five tons, and its protective coating is intended to keep the ledge from scratching.