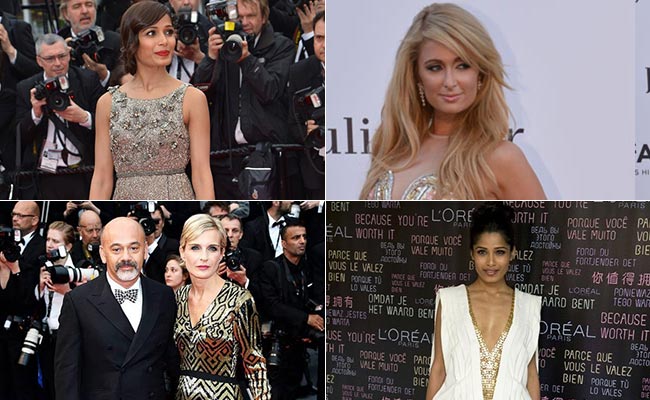 If you thought Indian film stars were the country's only representatives at the Cannes Films Festival, think again. Homegrown designers too have made a mark with their creations at the French Riviera, and not always as worn by desi celebs. The Indian fashion scene has gone international over the years and has made it to Cannes, one of the most-watched red carpets in the world.
It is a matter of pride for Indian designers when a Hollywood celeb chooses to wear a desi label over the multiple international couture houses on offer. It is a massive boost to the brand and the designer benefits greatly from the publicity. Here are a few global celebrities who looked East when dressing for the Cannes red carpet: 3. In 2013, French producer Melita Toscan du Plantier wore an art deco-inspired Abu Jani-Sandeep Khosla creation for the opening ceremony. The stunning black and gold outfit with geometric designs was the perfect pick for a star-studded even and Melita was praised for her bold red carpet choice.


4. Also in 2013, Chinese actress Bai Ling wore a gorgeous sequined cocktail dress by Indian designer duo Rohit Gandhi-Rahul Khanna at the opening ceremony and premiere of The Great Gatsby. The blingy dress accentuated her petite figure and she pulled it off perfectly on the red carpet.


5. Hollywood has claimed homegirl Freida Pinto but she hasn't entirely abandoned India when it comes to making a fashion splash. In 2012, she wore a white and gold Paco Rabanne by Manish Arora dress. The sharp silhouette and sexy neckline helped Freida stand out in a stylish crowd.


6. In 2013, Freida picked a glittering silver gown by fashion designer Sanchita Ajjampur. Her gilded dress had a thigh-high side slit which gave her an edgy look.