Can You Spy The Tiger With Your Little Eye In Pic Shared By Priyanka Gandhi's Son? 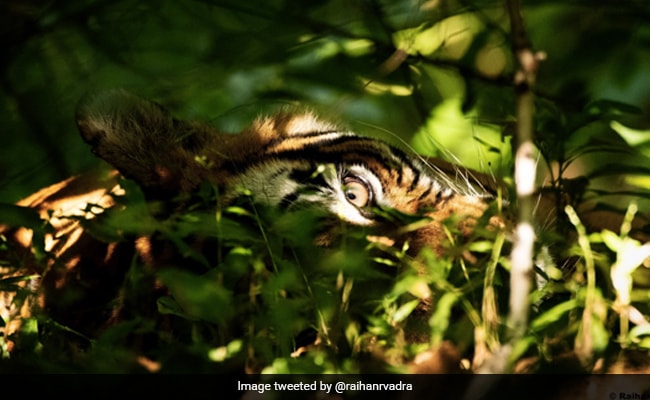 Congress leader Priyanka Gandhi Vadra's son, Raihan Rajiv Vadra, is currently busy photographing the wildlife of Ranthambore National Park. The 20-year-old amateur photographer has been treating his social media followers to some stunning shots from the wildlife reserve in Rajasthan. Unsurprisingly, most of the pictures feature the tigers that Ranthambore is famous for. The latest, snapped on Tuesday and shared on social media this morning, shows the eye of a tiger visible through green foliage.

According to Raihan Vadra, the picture shows tiger T-101 and was taken at Zone 6 of the national park on October 6.

"What a beautiful shot!! Congrats," wrote one person in the comments section. "Magnificent," said another.

Mr Vadra had said in an Instagram post dated September 26 that he would soon "return to the jungle" after a gap of eight months. Last week, he revealed that he had travelled to Ranthambore National Park, which he called his "favourite place".

Since then, Mr Vadra has shared several pictures of the tigers of Ranthambore. Take a look:

In June, Priyanka Gandhi had also shared one of her son's photographs on World Environment Day. The picture shows a peacock standing in the midst of lush green foliage.