"My daughter was crying and laughing at the same time." 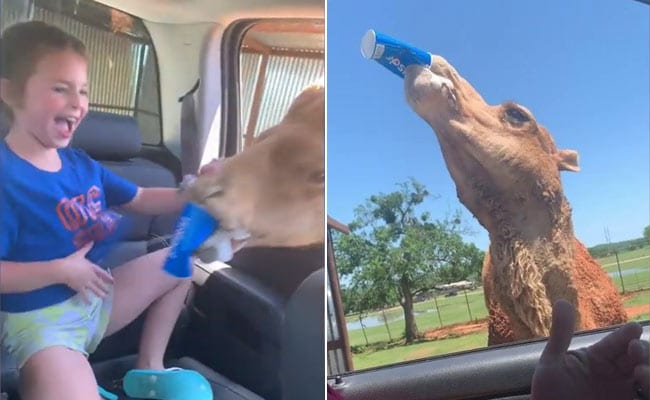 A hungry camel raided a family's car for food.

It was complete chaos inside a family's car when a rude camel poked its head in and began snatching food from their hands. Nathan Pugh was visiting a drive-through zoo in Oklahoma with his family when the camel decided to pay them an unsolicited visit. According to Daily Mail, the electrician was driving through the zoo with his wife Kelsi, nine-year-old son Bostyn and seven-year-old daughter Ryan.

The family had bought cups of animal feed for zoo residents at Arbuckle Wilderness in the city of Davis. "When you pay to get in, they give you food," said Mr Pugh, according to Yahoo News. "We bought 10 dollars worth of food. They put it in a sack and then they give you Pepsi cups to feed the animals with."

Their initially-peaceful excursion soon turned to pandemonium when the family reached the camel reserve in the park, and one hungry animal decided to start grabbing snacks.

"When she started the video, I only had one hand on the cup, and the thing took it," Mr Pugh said. "It bit me a little bit, but I was just mad that it took my cup."

After guzzling down one cup of feed, the camel set its sight on the food that Ryan was holding. Footage of the incident shows the seven-year-old dissolving into giggles as the camel reached for her cup and snatched it from her hands.

"My daughter was crying and laughing at the same time, and at the end, she wet her pants," said the girl's father. "We'd been locked up in the house, so we went out to make some memories."