"It is an honor to raise such a loving, compassionate child!" 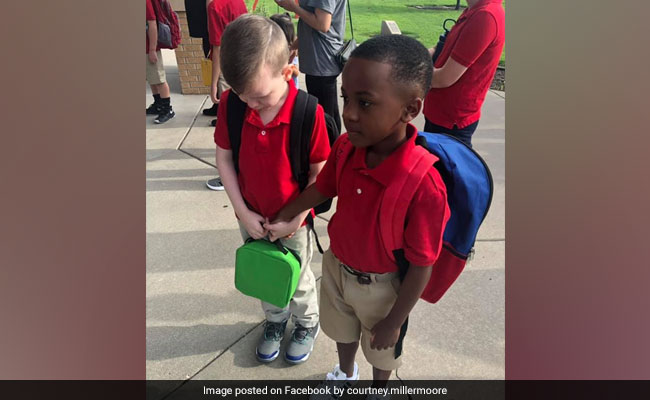 It was her son's first day of second grade, and April Crites worried that he would feel overwhelmed.

Conner, 8, was waiting for the doors to open at his school in Wichita, Kansas, on Aug. 14 when he started to cry. His autism sometimes makes him overstimulated, Crites said, and he had gotten away from his personal aide.

While Conner stood alone in a corner, crying, his classmate Christian Moore happened to glance at him.

"Instead of overlooking him like most kids would have, he (Christian) just reached over, grabbed his hand and made my son's day better," Crites, 29, said this week in an interview.

"It is an honor to raise such a loving, compassionate child!" Moore wrote. "He's a kid with a Big heart, the first day of school started off right."

When Conner came home that afternoon, Crites said, he told her that he had a great first day. He liked his new friends and his teacher, she said, and he didn't mention that he had gotten upset at the start of the day. Crites said she didn't know about her son's interaction with Christian until she saw the photo a few days later.

The boys had been in classes together before this year, Crites said, but they didn't know each other well. Now, she said, they're inseparable.

Conner and Christian sit together at lunch and play together at recess. Christian went to the Crites' house last weekend, and the pair played for an hour and a half without an argument - a feat that Crites said is unusual for her son. Conner has been asking his mom when Christian can come spend the night.

The Crites family has been touched by the attention the photo has received, Crites said. Conner gets excited when his classmates tell him they saw his picture on TV. Crites said her husband, who rarely cries, shed a few tears when he saw the photo.

The lesson, Crites said, is to remember that everyone is struggling with something that may be invisible to those around them.