Woman Adopted Blind Dachshund And His Guide Dog. Then One Was Abandoned

OJ, the blind dachshund, was brought in around noon Tuesday to the Shenandoah Valley Animal Services center near Staunton, Virginia, by a man who said he found the dog on the side of a road and that it appeared to be a stray. 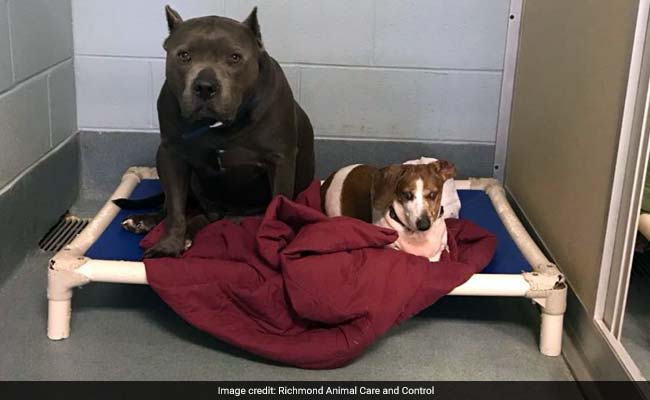 They came in as a pair and they had to go out as a pair - a blind, 12-year-old dachshund and his seeing-eye dog, a 6-year-old pit bull. The two found a new home this week, but a Virginia TV station reported that one dog was found wandering on a rural road 100 miles away.

The blind dachshund is named OJ, and the pit bull is named Blue Dozer.

The pair were brought last week to the Richmond Animal Care and Control shelter after their owner became homeless.

On its Facebook page, the Richmond shelter said the owner was "unable to provide care for them." The shelter described the relationship between the two dogs as the "cutest (and saddest) thing."

The two, the shelter said, are best friends and needed to be adopted together. Officials at the shelter wrote on Facebook, "OJ is blind and depends on Dozer to show him around." They went on, "We can't stand the cuteness and kindness these two share. Anyone willing to love a bonded pair of perfection?"

But Wednesday, a Richmond TV station - NBC12 - was among the first to report that the pair might have run into new trouble.

OJ, the blind dachshund, was brought in around noon Tuesday to the Shenandoah Valley Animal Services center near Staunton, Virginia, by a man who said he found the dog on the side of a road and that it appeared to be a stray.

Tracey Meadows, acting director at the Shenandoah animal shelter, said Wednesday that they checked the dog and used a microchip on it and a tracking database to eventually figure out that it had come from the Richmond facility, and they found the dog's new owner.

Meadows said that when the shelter contacted the woman who had adopted the dogs from Richmond, she explained that "someone was watching the dog [OJ] for us." Shelter officials said the woman did not explain how the OJ had come to be wandering on the roadside. Meadows said the owner told her the pitbull was with her.

Meadows said the owner told shelter officials they could have OJ. Meadows said she was working with officials at the Richmond shelter where the pair were originally adopted to get OJ back there.

At the Richmond animal shelter, a man who answered the emergency line would say only that the facility was "still working" on getting OJ back and that it is an "ongoing case." He declined to identify himself.

Meadows said "it is sad" that OJ and Blue Dozer were broken up.

"We have a bonded pair," she said. "You don't expect them to be separated."

Meadows said her shelter deals with 2,100 animals a year. She said she has "no clue" as to whether any charges would be filed against the woman who adopted the two dogs from Richmond. She said she also was not sure whether the pair of dogs would be reunited.

One without the other, Meadows said, "it's like you're taking something from them."

As for how OJ is doing in Staunton, Meadows said he seems to be okay. Earlier in the day, he had been nursing on his bed - a sign, according to Meadows, that he might be looking for comfort.

By the afternoon, she said, he seemed to have perked up and was playing with a toy.

Her moral of the story is to really think hard before you adopt an animal.

"If you take a bonded pair like them, you're taking on responsibility for two dogs," Meadows said. "You have to think financially and emotionally whether you're able to provide for the animals."

For the long term, Meadows said, she thinks OJ will be fine.

Promoted
Listen to the latest songs, only on JioSaavn.com
Still, she said, "I think his friend should be with him."