Richard Branson shared the stage with Anand Mahindra at an event in Mumbai. 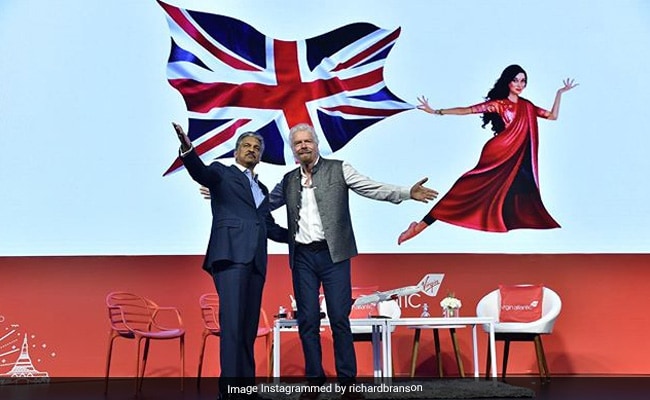 Richard Branson with Anand Mahindra at an event.

British businessman and founder of the Virgin Group, Richard Branson, revealed in an Instagram post that he has a connection to India. Mr Branson was in Mumbai to celebrate his airline Virgin Atlantic's new route to the city. Posting a picture from Virgin Atlantic's 'Business is an Adventure' event, where he shared the stage with Anand Mahindra, Mr Branson revealed that his great-great-great grandmother was Indian.

"Great to be in India to celebrate @virginatlantic's new route to Mumbai," he wrote. He said that he chatted with Anand Mahindra at the 'Business is an Adventure' event, before adding that he also "unveiled our newest flying icon, named Aria, after my great-great-great grandfather's wife who was Indian."

His post has been 'liked' more than 5,000 times since it was shared this afternoon.

According to Yahoo News, Mr Branson, while speaking at the event that took place on Wednesday, said that a DNA test he took some years ago revealed that his great-great-great grandmother belonged to in Tamil Nadu's Cuddalore.