Bhubaneswar Residents Fight "Crores And Crores" Of Stink Bugs. Watch If You Dare

True to their name, the bugs release a rotten garbage-like stench when crushed or killed. 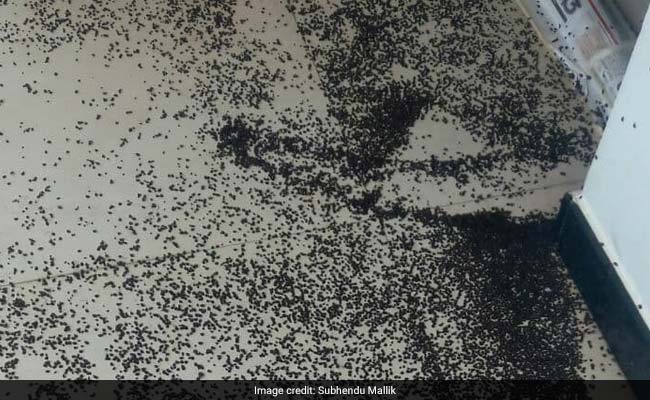 New Delhi: Residents around Bhubaneswar's Chandaka Bharatpur forest are living a nightmare with one of the worst stink bug infestations the state has ever seen. Stink bugs in exceedingly large numbers have infested homes in Niladri Vihar, Chandrasekharpur area of the city making life increasingly difficult for locals.

The astoundingly large population of stink bugs is due to the flowering of thorny bamboo trees inside the forest reserve, which occurs every 35 years, making it one of the worst outbreaks in the state. Subhendu Mallik, honorary wildlife warden of Odisha's Khordha, estimated "crores and crores" of stink bugs in the area.

"People are tired of sweeping their homes and unable to lift a broom. They looked pale, desperate and helpless," Subhendu Mallik told NDTV. "Some have locked their rooms, left and gone to their relatives. They have given up."

Although the bugs don't bite, they tend to crawl into any and every space available - leaving no place safe from the insects.

"I have seen them on the roof of 4-storeyed building," Mr Mallik added.

Images and videos show thousands of pesky bugs swarming a home in Chandrasekharpur, covering everything from the entrance to the kitchen. In one horrid sight, the first floor balcony of the house is seen entirely covered with a blanket of stink bugs.

True to their name, the bugs release a rotten garbage-like stench when crushed or killed. Many residents resorted to pouring kerosene on the bugs to protect their homes from the invasion but with little success, reported Odisha TV. The solution is using a non-lethal repellent like bleaching powder to create a chemical barrier, advised Dr Niarakar Bhol, a professor of forestry at Orissa University of Agriculture Technology (OUAT).

Promoted
Listen to the latest songs, only on JioSaavn.com
"But we cannot advise to use pesticides because if other animals and birds eat those dead insects they will also die. So caution has to be maintained," Dr Niarakar Bhol told The Times of India.

The bugs, that feed on plants, usually die after 15 days when the food supply depletes. It's been nine days but the problem is far from over.Click for more trending news