YouTuber Rodrigo Inostroza said that he recorded a path behind his home in Victoria, Canada, for over a year in order to capture the changing seasons. 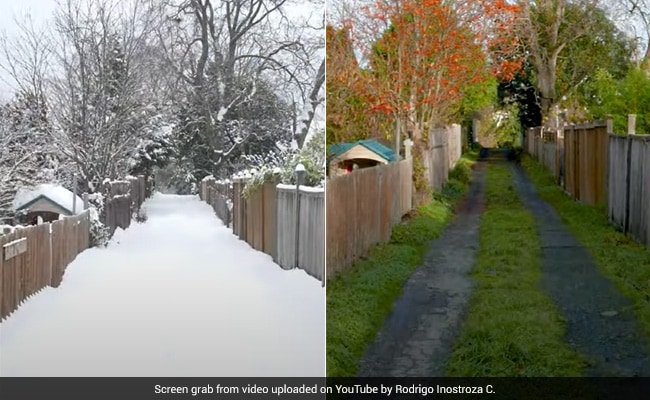 The video has left internet users in awe.

An incredible time-lapse video showing all four seasons in just 18 seconds has surfaced online. YouTuber Rodrigo Inostroza shared the clip and in the caption, he informed that he recorded a path behind his home in Victoria, Canada, for over a year in order to capture the changing seasons.

Speaking to Newsweek, Mr Inostroza said that he started taking the path behind his house to the grocery store not long after moving in. He said he was amazed at how beautifully it was transformed as the seasons changed. “I am a videographer and social media professional, so of course, I thought 'Huh... transition quickly between seasons would be awesome,” he added.

Mr Inostroza recorded the path between November 2020 and November 2021. He also shared the short clip on Reddit, where it received a lot of attention. The video has left internet users in awe.

One user wrote, “Smooth transition and very immersive. I love this.” Another jokingly said, “If I did this in Florida it would be a still image.” A third added, “Beautiful. I could not live somewhere that did not have a season change," while a fourth wrote, “This could have all been recorded on the same day in Scotland.”

The response to the video left Mr Inostroza thrilled. He told Newsweek that he didn't expect that people would connect to the clip in their own personal ways. “It was pretty surreal,” he added.

Further, Mr Inostroza also went on to reveal that he plans to share more such videos in future. “I will upload more footage from these walks on my YouTube channel. Some videos will be short, others will be a lot longer,” he stated.