"They're very friendly, very amusing, and everyone enjoys them" - but these emus are no longer welcome into the hotel. 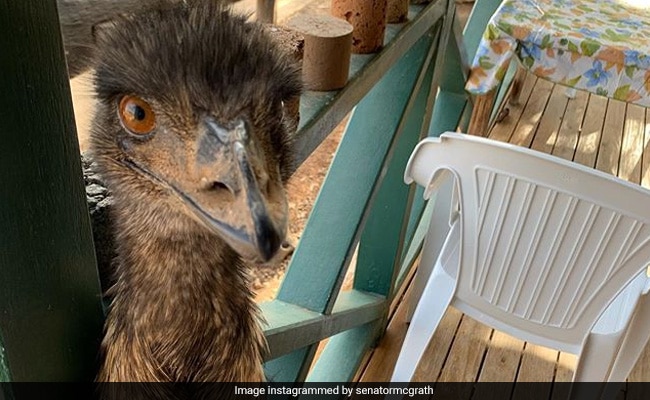 The Yaraka Hotel has banned emus Kevin and Carol from entering the establishment.

An emu walked into a bar - and was not welcomed in. In an amusing story that has become a viral hit on social media, an Australian pub has banned two local emus from entering the establishment - citing their "bad behaviour".

The Yaraka Hotel in situated in a tiny town of the same name in Central Queensland. According to Nine News, the town has an official population of just 12 people, and all the residents share a certain fondness for the two large, flightless birds that have become its unofficial mascots.

The emus were hatched from a clutch of abandoned emu about 18 months ago. While some grew adventurous and left town, two emus - named Kevin and Carol - stuck around and became beloved pets of Yaraka.

"They're very friendly, very amusing, and everyone enjoys them," said Chris Gimblett, owner of The Yaraka Hotel.

The hotel, however, was forced to ban Kevin and Carol after they became too unruly and "smelly". They also started stealing food from guests, going so far as to peck morsels straight off their plates.

"They've been stealing things from the guests, especially their food. They'd stick their heads in and pinch toast out of the toaster," Mr Gimblett's wife, Gerry Gimblett, explained to The Guardian.

"But the main reason we've banned them is their droppings. They're enormous, very large and very smelly, and they created great stains," she said.

The Yaraka Hotel has now installed a rope barrier at the entrance to keep Kevin and Carol (who is actually a male emu) outside. A sign requests customers to reconnect the rope after entering because "emus have been banned from this establishment for bad behavior."

Senator James McGrath was among those amused by the sign - he shared a photo of it on Facebook where it has collected hundreds of 'likes'.

Emus are the second-largest living bird by height, endemic to Australia. They are known to be inquisitive and often approach humans.