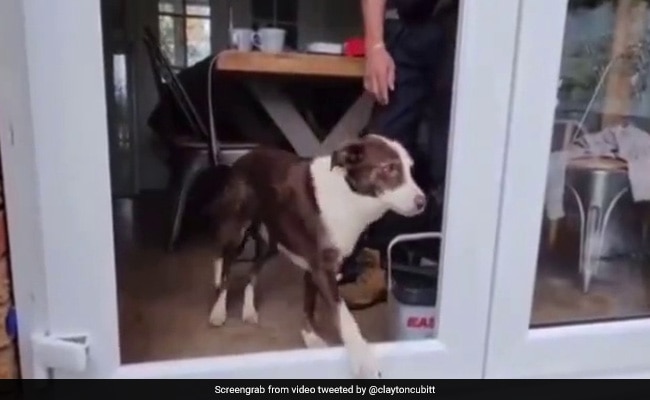 Anand Mahindra shared a video of a dog on Twitter.

Industrialist Anand Mahindra often keeps his followers entertained by posting viral photos or videos. He has done it once again. The Chairman of the Mahindra Group tweeted a funny video but there's more to it than just humour. He has added more meaning to the video by dropping a life lesson in his caption. The video, initially shared by a user named Clayton Cubitt, shows a dog standing at a wooden door frame. The glass from the door frame has been taken out, but the dog thinks that the glass obstruction is intact.

While its owner calls it to step out, the dog does not leap through the frame but waits for the door to be opened. To that end, he also keeps pawing at the door, not realising that he's free to move out. We hear the owners laughing at the dog's behaviour.

For Mr Mahindra, the video explained the importance of not falling into a rut. He shared the video while adding a business tip: "No better way of illustrating our addiction to habit…The most valuable skill in business today is knowing how to break free," he wrote.

No better way of illustrating our addiction to habit…The most valuable skill in business today is knowing how to break free… https://t.co/HQ7cmgxtyp

Many Twitter users agreed with Mr Mahindra's stance. A user acknowledged that the video was funny but it reflected how human minds also work. "Though it is shown by a dog's habits it shows our mindsets also," wrote the user.

Old habits are very stubborn which do not go away in a day. Though it is shown by a dog's habits but it shows our mindsets also.

One user wrote, "Habit conditions your mind. Focus on your activity to improve results. I would love to see someone showing me a similar habit of mine."

Indeed it is. Habit conditions your mind. Focus on your activity to improve result.
I would love to see someone showing me similar habit of mine.
That's why we need "Guru" or "Mentor"

Another user noted that this was true not only in business but in various walks of life. "Change and adaptation to changes is the quality that has made humans evolve," they wrote. They added, "The future belongs to those who won't be caged by limitations."

Not only in business in every walk of life

A user found that the dog's behaviour in the video represented Ivan Pavlov's experiments and Pavlov's theory of classical conditioning. Ivan Pavlov was a noted Russian physiologist who experimented on the conditioned behaviour of dogs among other experiments.

Mr Anand Mahindra's tweet did not only spark up serious discussions on the human mind and the role of conditioning in our adaptation. But the tweet also gave rise to witty comments. One user compared the dog's behaviour with the tendency of humans to swipe up any lighted screen, even if it isn't a touch phone. Her's what they tweeted:

Very true ...like how we keep swiping at any lighted screen in front of us... even though it is not a 'Touch Screen' ????

Indeed, the tweet shows how tricky the human mind can behave through habitual conditioning.