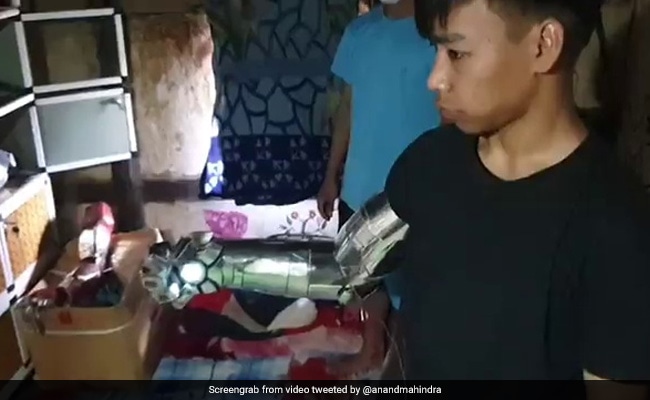 Earlier this year, Anand Mahindra, the Chairman of Mahindra Group, was left impressed by a teenager from Manipur who built an Iron Man suit from scrap. In a series of tweets applauding his "obvious talent", Mr Mahindra promised to support Prem and wrote that the Mahindra Foundation would facilitate the continuing education of Prem and his siblings. True to his word, the industrialist revealed in a tweet last night that Prem had arrived at Mahindra University in Hyderabad to study engineering.

"Remember Prem, our young Indian Ironman from Imphal?" Mr Mahindra asked his 8.5 million followers. "We promised to help him get the engineering education he wanted and I'm delighted to share that he has arrived at @MahindraUni in Hyderabad," he continued, also adding a special thank you to the Indigo airline team for taking "such good care" of Prem during his journey.

Remember Prem, our young Indian Ironman from Imphal? We promised to help him get the engineering education he wanted and I'm delighted to share that he has arrived at @MahindraUni in Hyderabad. Thank you Indigo for taking such good care of him.. https://t.co/7Z6yBi39yipic.twitter.com/Hw7f0c5lGW

Anand Mahindra had first shared Prem's story back in September. Without any formal training, Prem had managed to build an Iron Man suit using scrap material - a fact that left Mr Mahindra and many others impressed. Mr Mahindra shared a video which showed the teenager wearing the suit, which appears to be a close replica of the suit Tony Stark wears in the Marvel movies.

Move over Tony Stark. Make way for the REAL Iron Man. And it would be a privilege to assist him & his siblings in their education. If someone can connect me to him, it will be a privilege for me & @KCMahindraEduc1 to support him. (🙏🏽 @jaavedjaaferi for forwarding the video) pic.twitter.com/sKs8V3H8xQ

"I am awestruck and inspired by Prem's ambition & skills that have flowered despite-not because of-his circumstances," Anand Mahindra wrote a few days afterwards, when his team managed to contact the teen. Mr Mahindra's team also visited Prem at his town Heirok a few days after his first tweet. The industrialist had said that top officials of the Mahindra Group would mentor the teen's education.

Our Group's Chief Design Officer, @BosePratap is equally inspired by Prem & will be connecting with Prem to mentor his career. @SheetalMehta the head of the Mahindra Foundation will facilitate the continuing education of Prem & his siblings… (3/3) pic.twitter.com/wVDG6MZmYN

Prem's video was first forwarded to Anand Mahindra by actor Jaaved Jaaferi. The industrialist's tweets were largely credited with bringing positive attention to the Manipur teen. Congress's Jairam Ramesh had also visited Prem at the time and promised him full support.

I saw @anandmahindra's tweet while in Imphal,& visited the tremendously talented Prem Ningombam from Heirok. His creativity & drive despite his socioeconomic conditions astounded me! I've requested my colleague Okendro to also extend Prem fullest support to fulfil his aspirations https://t.co/24o7iUEGgSpic.twitter.com/oFdJIc8TY0

This is not the first time that Anand Mahindra's Twitter posts have been instrumental in providing help to those in need. Two years ago, he had tweeted about Kamalathal -- Tamil Nadu's now-famous "Idli Amma". You can read more about what happened here.