Amazon Boss Jeff Bezos Walks His Robot Dog. It Can Even Open Doors 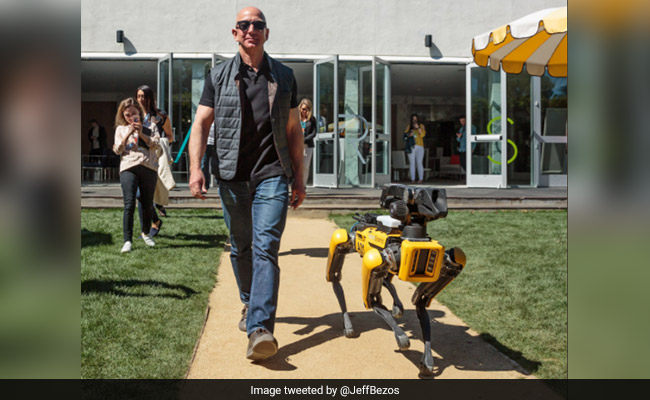 Amazon founder Jeff Bezos stepped out to take his "new dog" for a walk and the Internet lost its cool. That's probably because the world's richest man has no ordinary dog. Instead, Jeff Bezos was photographed walking Boston Dynamics' dog-like robot called SpotMini. Welcome to the future! The picture Jeff Bezos tweeted out to his 480,000 Twitter followers looks like something right out of a science-fiction movie. In just nine hours, the photo has been "liked" over 13,000 times and retweeted over 3,400 times.

Taking my new dog for a walk at the #MARS2018 conference. #BostonDynamicspic.twitter.com/vE6CXrvV3o

If that "dog" looks familiar to you, you probably saw it doing neat tricks like opening doors. This video went crazy viral on social media last month and had netizens worrying that robots were slowly going to take over the world.

The four-legged machine can handle objects, climbs stairs, and Boston Dynamics expects SpotMini to operate in offices, homes and outdoors.

Jeff Bezos tweeted the photo of himself with SpotMini at Amazon's MARS conference, which is an annual invitation-only meeting on machine learning, automation, robotics and space exploration.

The Internet had a lot of thoughts on the robot dog:

It doesn't look like it wants ear scratches or nose boops, Jeff. 2/10 would not pet

A few people were excited

I'd be down with having my packages delivered by a fleet of robot dogs.

Promoted
Listen to the latest songs, only on JioSaavn.com
Others less so

This is two weeks after Alexa laughed maniacally. Why do I find this unsettling?

This made us LOL

In a parallel robot world the tweet would be "taking the richest man in the world for a walk".