The Rs 25,000 per kg ghevar has been made by Braj Rasayan Mitthan Bhandar near Shah Market in Agra. 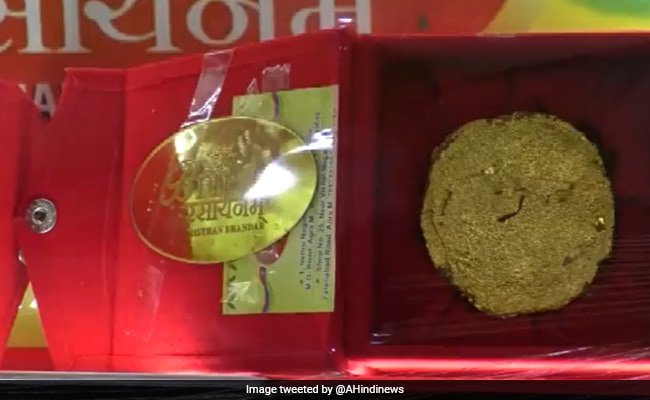 This ghevar is topped with a thin layer of 24-carat gold.

Ahead of Raksha Bandhan, a sweet shop in Uttar Pradesh is selling "golden ghevar" which costs Rs 25,000 per kg. Ghevar finds its roots in Rajasthani cuisine. It is a disc-shaped sweet dish made with maida, ghee, sugar syrup and some dry fruits. Traditionally, the dish is associated with the month of Shravan, Teej and Raksha Bandhan festivals.

Now, at a sweet shop in Agra, this simple dish is being sold at a whopping price as it is topped with a thin layer of 24-carat gold. According to ANI, the Rs 25,000 per kg sweet has been made by Braj Rasayan Mitthan Bhandar near Shah Market in Agra.

In a tweet, the outlet wrote, "Uttar Pradesh: Specially 'Golden Ghevar' is being made in Agra for Raksha Bandhan. The price of Golden Ghevar is Rs 25,000 per kg. The specialty of this Ghevar is that it is covered with 24 carat gold."

Ever since the arrival of this unique dish, several people have been thronging the sweet store to buy the delicacy.

Ghevar has a honeycomb-like crispy texture which is subtly flavoured with sugar and then topped with dry fruits, saffron, or mawa. During this time of the year, one can find halwai shops in the Northern parts of the nation having a dedicated section for freshly made ghevar.

Coming back to Raksha Bandhan, this year, the festival will be celebrated on Thursday, August 11, and needless to say, preparations have begun in full swing. Shops across the country have begun to sell customised gifts, desserts and rakhis. The festival is usually celebrated with traditional Indian foods and snacks like chhole bhature and pav bhaji.