This big moment took place in the latest episode of 'Pokemon Ultimate Journeys: The Series', which premiered in Japan. 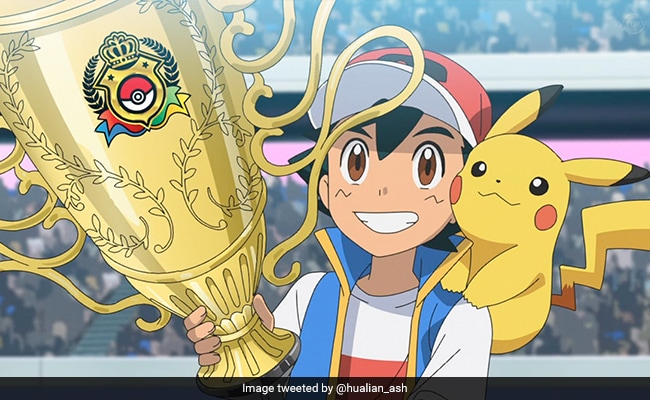 After 25 years, Ash Ketchum, the lead character in the Pokemon anime series, has finally become the world champion and won the title of world's greatest Pokemon trainer. The official account of Pokemon took to microblogging site Twitter to share the news. They wrote, "He's done it! Ash has become a World Champion!" alongside a video congratulating the new star. The tweet has received over 4.3 million views and 3.6 lakh shares.

He's done it! Ash has become a World Champion! 🏆🎉 pic.twitter.com/a2jPb8pym3

Ash and his Pokemon partner Pikachu accomplish their eagerly awaited dream by winning the eighth tournament of the Pokemon World Coronation Series in the latest episode of "Pokemon Ultimate Journeys: The Series" which aired in Japan on Friday. As per the BBC, the final battle took place between Ash and Leon, a reigning world champion and lasted four episodes. Additionally, it witnessed the reintroduction of former friends from earlier season, particularly Brock, Misty, and Dawn, three favourites of viewers.

Sarah Natochenny, the voice actor for Ash in the American version of the series, tweeted, "I can't wait to share the English dub of this episode of Pokemon with the world. What an absolute honor to be voicing Ash Ketchum as he becomes a world champion. He really is the very best Like no one ever was."

Taito Okiura, Vice President of Marketing for The Pokemon Company International told Variety, "Ash Ketchum's determination and perseverance to achieve his goal of becoming the world's top Pokemon Trainer over the course of 25 seasons represents the very best of what it means to be a Trainer."

"We cannot wait to celebrate this moment with Pokemon fans when the newest season of 'Pokemon Ultimate Journeys: The Series' and this adventure-defining episode air around the world in the coming year. This is a season fans won't want to miss!" he continued sharing the happy news.

Many fans of the anime franchise have taken to social media to express their joy at the character becoming the strongest Pokemon trainer in the world. One user wrote, "25 years! We have waited 25 years for this moment. Ash became the VERY BEST!!!!" "A legend of the game - congrats to one of the best to ever do it," wrote a second on Twitter.

The television show initially started out as a video game, and has aired more than 1,200 episodes. Since 1997, when Ash Ketchum first saw the Pikachu, the smiling yellow squirrel, on his 10th birthday, the series has featured his journey to become a Pokemon Master. As per their official Twitter handle, two new Pokemon games named 'Scarlet' and 'Violet', will be released on November 18.