The video has amassed over 13 million views on Instagram and has more than 8 lakh likes. 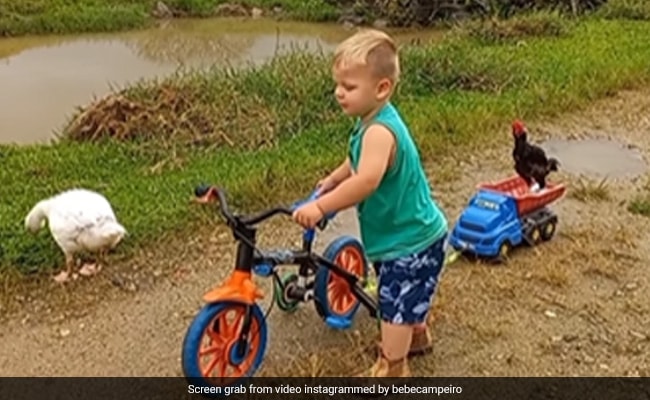 Heitor Borges enjoys a fan following of 2,87,000 on Instagram.

Feeling the mid-week blues? Well, this video of a toddler giving a lift to a rooster will instantly uplift your mood. Posted by an Instagram user, Heitor Borges, the video shows a toddler lifting his pet rooster in his toy truck and happily walking towards his home. The toddler is also accompanied by a duck.

Toddler, Heitor Borges enjoys a fan following of 2,87,000 on Instagram. The account is handled by his parents, the toddler is often seen playing with his unusual pet, a rooster.

Along with the video, the caption reads when translated to English, "While the rain gives a truce, let's make the most of it, guys."

The video has amassed over 13 million views on Instagram and has more than 8 lakh likes. A user commented, "The most impressive thing is the wisdom of the animal knowing that it is a child and harmless!"

Another user wrote, "Very beautiful!!!! The interesting thing is that the duck accompanies him too lol and the rooster stays where he wants! This boy is very cute."

The third user joked, "The passenger is more professional than the driver itself."

"I thought the rooster was going to jump out on the first swing that the bike gave.. but Nah, she enjoyed the ride. But what caught my attention the most was the pegs in boots, what a "hot" thing. It's the best," the fourth wrote.