A Relaxing Massage... From A Snake. Are You Brave Enough For This Salon? 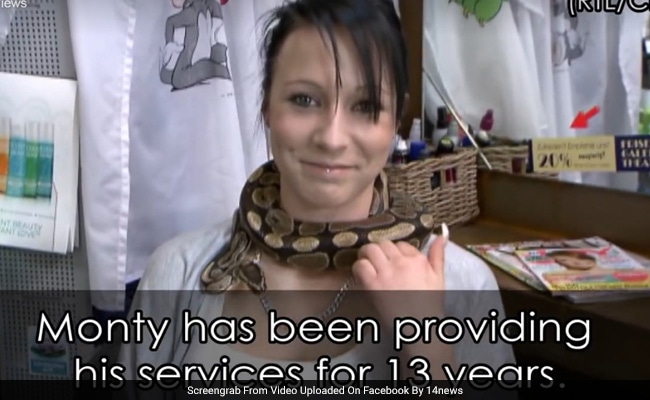 Monty the python is well-known for his neck massages.

New Delhi: In Dresden, Germany, a hair salon is offering neck massages with a difference. The Haar Mode Team salon is famous for an unusual employee - a python named Monty. Customers can choose to get a neck massage after their haircut from Monty the python. Sounds slightly strange and slightly terrifying? Well, Monty has been offering his services to the salon for the past 13 years and is one of the main attractions over there. Frank Doehlen, proprietor of the salon, says that the python's body - 90% muscles - makes him an ideal masseur, according to 10 News.

Pythons kill their prey by wrapping themselves around it, constricting their muscles and suffocating it. However, if it is any consolation, incidents of these snakes killing humans are very rare, according to the National Geographic.

So what do clients think of this unusual massage service? According to 10 News, one customer named Hanna Haubold says, "It is quite heavy and warm, I thought it would feel cold. Well, it lies around the neck, that's all." A commenter on Monty's video says, "NO", but a lot of regular clients love the python's massages.

While customers are not charged extra for this neck massage, they are expected to make a small donation for Monty's food.

Promoted
Listen to the latest songs, only on JioSaavn.com
If you are curious to see the snake in action, watch Monty the python's video below:


What do you think? Do let us know using the comments section below.