6-Foot Alligator Seen Peeking Out From Storm Drain In Florida 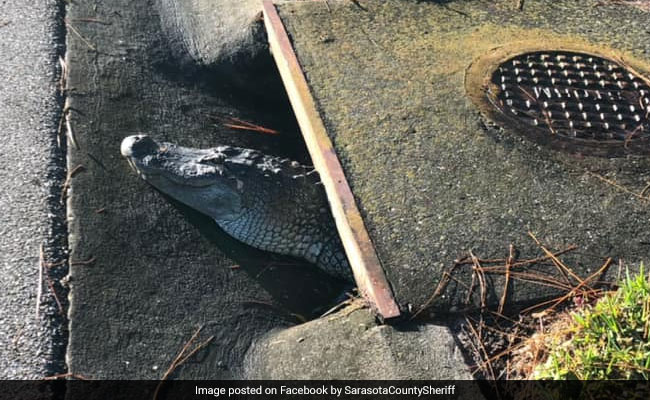 In a sight that bears a striking similarity to the sewer scene from the supernatural horror film 'It', a huge alligator was seen peeking out from a storm drain in Florida.

The Sarasota County Sheriff's Office said deputies responded to report of the alligator stuck inside the storm drain on Monday morning. Deputies arrived at the scene - a street in the city of Venice - to help the six-foot alligator free itself.

"Imagine coming across this bad boy on your morning jog!!" the Sarasota County Sheriff's Office wrote on Facebook while sharing a photograph of the gator. The image shows the reptile's head inside the storm drain where it had managed to lodge itself. "Deputies responded to south Venice this morning to help this approximately 6' alligator free himself from a storm drain," they added.

The image has gone viral on Facebook, racking up over 1,000 'shares' and dozens of comments.

"Pennywise the alligator. Where's his red balloon?" asked on Facebook user, while another said, "That's almost as bad as coming across Pennywise from IT."

According to the Sheriff's Office, the gator was freed when deputies lifted the concrete slab on top of it. A trapper was called but did not respond, so the alligator was allowed to go free. It returned safely to the lake from which it had wandered.

Alligators are not an uncommon sight in Florida - the US state has an alligator population of roughly 1.25 million.