36-Foot Whale Found Dead... In The Middle Of Amazon Jungle

Biologists will now collect forensic samples to determine the cause of the humpback whale's death. 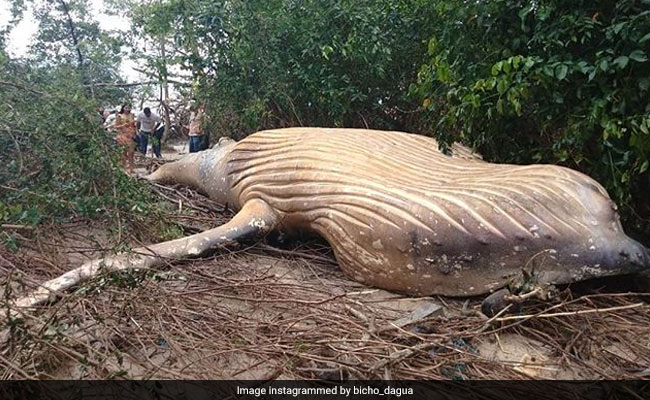 A photo of the humpback whale, shared by the Bicho D'agua Institute.

A 36-foot-long humpback whale was found dead in an Amazon jungle on Friday, surprising wildlife experts and netizens alike. According to ABC News, the whale was found on the Brazilian island of Marajo, at the mouth of the Amazon River - about 15 metres from the ocean.

An NGO working on Marajo Island, the Bicho D'agua Institute, said the animal may have already been dead when it was washed ashore during high tides and came to rest in the mangroves.

"[It] was a puppy about a year old... Not an adult animal," they said in a post on social media, sharing pics of the whale in the jungle.

According to the Sun, marine expert Renata Emin said: "We're still not sure how it landed here, but we're guessing that the creature was floating close to the shore and the tide, which has been pretty considerable over the past few days, picked it up and threw it inland, into the mangrove.

"Along with this astonishing feat, we are baffled as to what a humpback whale is doing on the north coast of Brazil during February because this is a very unusual occurrence."

Pics of the humpback whale, meanwhile, have created a stir on social media, collecting a ton of reactions.

Biologists will now collect forensic samples to determine the cause of the whale's death.