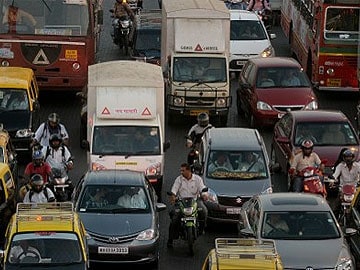 n this picture taken on March 13, 2014, commuters travel along a busy stretch of road in Mumbai

Mumbai: A handful of fed-up residents in one of the world's noisiest cities have taken on a daunting challenge: persuading Indian drivers to stop honking their car horns.

Now two separate teams in the city have come up with devices aimed at instilling some peace: one by forcing overzealous horn-users to open their wallets, and another by simply attacking drivers' consciences.

"People blow their horns just for no sake," said Jayraj Salgaonkar, who with a group of engineers has developed the 'Oren horn usage meter' (the name 'Oren' derives from local pronunciation of the word 'horn').

The meter does not prevent the horn from working but instead allows for a limited amount of honking, after which it causes the vehicle's tail-lights to flash and alert the traffic police, who could then issue a fine.

The driver gets green, amber and red-light warnings over his honk allowance and can top up his meter "like a pre-paid phone card", said Salgaonkar. He is in talks with local authorities to get the device mandated city-wide.

"I have invested money and time and emotion," he told AFP, relating his years of exasperation with the city's cacophony.

"People take pride in honking their horn. There's an ego trip over having a car. Until you make people pay for their usage of the horn, it's not going to work," said the publisher turned honk activist, who is hoping that the potential revenues brought by the system will help persuade authorities to adopt it.

'Project Bleep' involves a little red button on the dashboard that beeps and flashes with a frowning face, "to make the driver conscious that he just honked and make him deliberate why he did it," said Mayur Tekchandaney, one of its creators.

"Mostly it's habitual. The driver doesn't realise he's doing it."

After testing the device on 30 drivers over six months, Tekchandaney and his team at Mumbai design firm Briefcase found an average 61 percent reduction in honking.

"The benefit is to other people on the road, society in general. It creates a nuisance for the driver," said Tekchandaney.

Their goal may sound ambitious in a country where honking is so pervasive that foreign car makers, such as Audi and Volkswagen, fit their Indian vehicles with stronger, longer-life horns.

Nationwide, the messages "Horn OK Please" or "Blow Horn" are colourfully painted on the back of most trucks and lorries, encouraging drivers to make their presence audibly known as they overtake.

And the noise is only set to increase as more vehicles pile into densely-packed Mumbai, where the middle-class is growing and whose shoddy infrastructure and crowded trains do little to encourage the use of public transport.

There are now about 900,000 cars, 10,000 buses and two million two-wheelers plying the roads of the financial capital with a population of some 12 million, according to local transport expert Ashok Datar.

Their horns are not just an annoyance, say anti-noise crusaders, who warn that honking is taking a worrying toll on the health of Indian city-dwellers -- especially when combined with construction projects, roadworks and various religious festivals, which are often celebrated with ear-splitting firecrackers.

"In hospitals I know people who have suffered very severely even in intensive care units because of the noise (outside)," said Sumaira Abdulali, founder of the Awaaz Foundation which campaigns against noise pollution.

"A lot of people in Mumbai are suffering these things and the medical costs are quite high. Cutting down noise would cost much less," she said.

Mumbai residents are not alone in their quest for a quieter life.

In the capital New Delhi, a group of campaigners takes to the streets several times a month, plastering cars with "Do Not Honk!" stickers.

In southern Bangalore, residents last year launched an "I Won't Honk Campaign", backed by Indian cricketer Rahul Dravid, which aimed to get drivers pledging not to use their horns unless completely necessary.

But given the ingrained habit of honking, it seems such campaigns or gadgets are unlikely to work unless they are made compulsory.

"Most people say there is excess honking but they think it's the other drivers," said Ram Prasad at Final Mile, a behavioural research group in Mumbai which has examined the honking phenomenon.

Promoted
Listen to the latest songs, only on JioSaavn.com
Prasad also warned that introducing traffic police fines may only encourage bribing, giving drivers the feeling that "they have only extra licence to blow and honk".

"Any device that gives subtle feedback, people will be more willing to take," he said.
Comments
Mumbaitraffichonking