Railways Minister Piyush Goyal said he expected the presence of a third party, IIT Mumbai, would improve the quality of safety audits to be conducted in Mumbai. 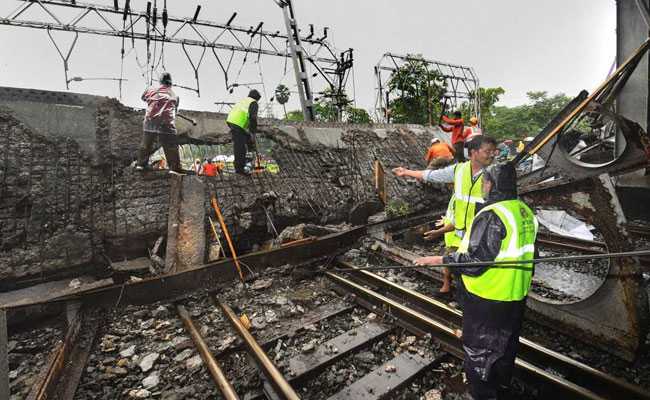 The 40-year-old Mumbai bridge that collapsed on Tuesday had cleared the railway's safety audit ordered after last year's stampede at Elphinstone railway station. This audit, conducted on 12 November 2017, did not report any "major abnormality" with the bridge", Piyush Goyal said after visiting the Gokhale bridge that had caved in early on Tuesday morning.

The minister did not elaborate on the quality of safety audits carried out by engineers of the railways and the Brihanmumbai Municipal Corporation, or BMC that had vetted a bridge just seven months before its collapse.

This is why, Mr Goyal said in response to questions, he had reached out to Mumbai's Indian Institute of Technology to lead the joint audit teams that will inspect the city's 445 railway bridges over the next six months.

IIT Mumbai director Devang V Khakhar has agreed to help the railways with the future audits at the minister's request.

Mr Goyal hoped that the presence of a third party would improve the quality of future audits.

He, however, underlined that safety audits will continue to face one limitation; these inspections can only be carried out at night.

When the team audits a bridge, they need to switch off the overhead lines that power the trains. If the audits were to be conducted during the day, the power will need to be shut down leading to disruptions and inconvenience to the passengers.

The rail minister said the issues flagged by the audit teams would be fixed by the railways on a mission mode.

Mr Goyal, who had taken over of the railways ministry days before last September's stampede at the Elphinstone railway station foot overbridge that killed 22 people, had ordered a safety audit of all bridges at that time.

The Gokhale bridge that connects Andheri East and Andheri West stations crumbled around 7.30 am on Tuesday morning. It was built in 1971. The minister said five people injured in the accident are being treated at two city hospitals.