Dramatic visuals of the incident show passersby overpowering the accused and beating them even as a policeman tries to intervene. 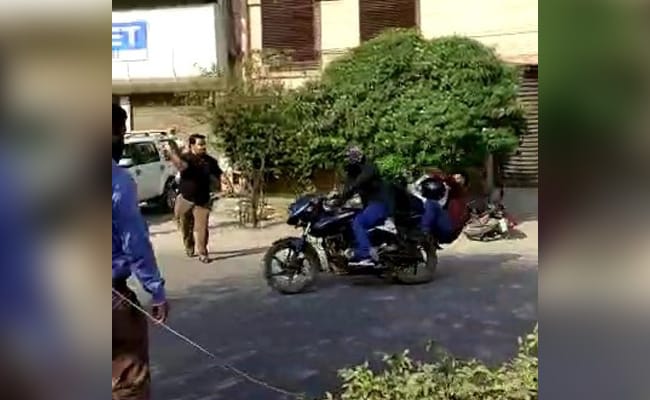 In Punjab's Ludhiana, passersby overpowered the three men and beating them up after they fell.

Three of the five armed men, who tried to rob a branch of Muthoot Finance in Punjab's Ludhiana today, were caught and beaten mercilessly by people after two of them panicked and fell from the motorcycle while trying to escape, police said today.

The robbers were arrested by the police and their firearms seized, but not before they tried to shoot at the cops, injuring a bystander.

Dramatic visuals of the incident show passersby overpowering the accused and beating them even as a policeman tries to intervene.

unidentified armed robbers were nabbed by the cops for attempting theft and firing at the cops in the office of Muthoot Finance at Dungri Road in Ludhiana on Friday. @ndtvpic.twitter.com/cnPz35OPTF

"We arrested three people who had tried to rob a branch of Muthoot Finance. They shot at the police to keep us from catching them. Some people have been injured. The case is being investigated," Joint Commissioner Bhagirath Meena said.

According to the police, the robbers had shot several rounds inside the office as well to intimidate the staff.

"A group of men came in just when the branch had opened for the day and tied me up. They also tied up the others who came later," a guard on duty at the branch said.

The incident, which led to a minor traffic jam, has created panic and fear in the area.

According to the police, chaos ensued after they reached the Dugri Road area in response to information that a group of armed men had entered an office here, fired shots to intimidate the staff and tied them up while trying to loot the branch.

On seeing the police, the robbers tried to escape, but were overpowered by the large crowd that had gathered outside.

A young man, identified as Deepak who works at the car market in the vicinity, was injured when the accused fired shots at the police and has been admitted to a hospital.