Tej Prakash Singh, a police inspector from Lucknow, was removed from his post and sent to the Police Lines after a viral video showed an elderly woman falling at his feet, pleading that a First Information Report be lodged over the death of her 20-year-old grandson. In the video, the officer is seen sitting complacently.

The police station at Gudamba was ranked among the India's three best performing police units last year by the union home ministry. It had received an award from Union Minister Rajnath Singh, who is also a Lok Sabha lawmaker from Lucknow.  "Extremely courteous" staff was one of the strengths of the police station, the ministry had said.

Akash Yadav, a labourer at a plywood factory on the outskirts of the city, was crushed under a malfunctioning machine, alleged 75-year-old Brahma Devi. 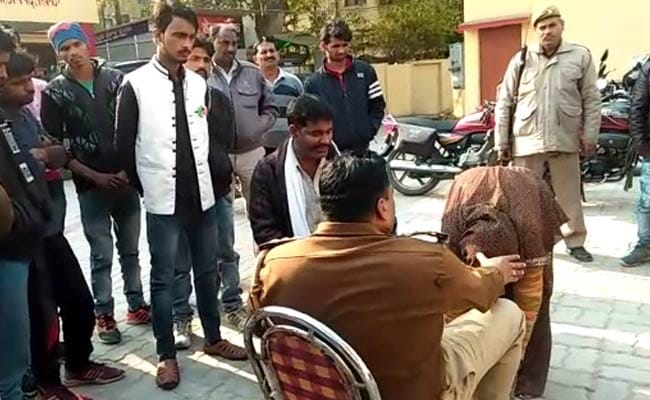 In the video, Brahma Devi is seen weeping, hands folded. When the officer - who is in-charge of the police station - seemed unmoved, she fell at his feet. All the while, Mr Singh sat leisurely, his legs crossed, watching her.

Relatives of Akash Yadav told the media that they had gone to the police station to try and get an FIR registered against Ajay Gupta, owner of the plywood factory. Mr Gupta has been missing since the day of the incident.

Locals in the area allege that the machines used in the factory were outdated and in dire need of repair.

The Lucknow police have issued a statement, saying the inspector has been moved from the police station and an inquiry is being conducted by a senior officer. An FIR has also been registered against the factory owner, but no arrest has been made.

"We will examine the whole video... find out the circumstances and act further in the case," said Harendra Singh, a senior police officer in Lucknow.