With Green Campaign, Kolkata Candidate's Fight For Environment And Change

Niraj Agarwal hopes his campaign makes a change in the mindset of 17 lakh South Kolkata voters.

While many believe that the number of people who show up at rallies or listen intently to speeches defines the chances of a candidate in elections, Niraj Agarwal, an independent contender from Kolkata Dakshin constituency in Kolkata for the ongoing national polls is not one of them. For him, his issue of protecting the environment is supreme.

Mr Agarwal, who campaigns on foot, heads out on a weekday at 5pm, with his bio-degradable campaign symbol, binoculars, to spread awareness among the masses.

"We chose binoculars as our election symbol because it help us to look at things which are at a distance. The issues that we are fighting for environment, sustainability, waste management require a lot of foresight," said Mr Agarwal, who wants a cleaner environment for his two boys. 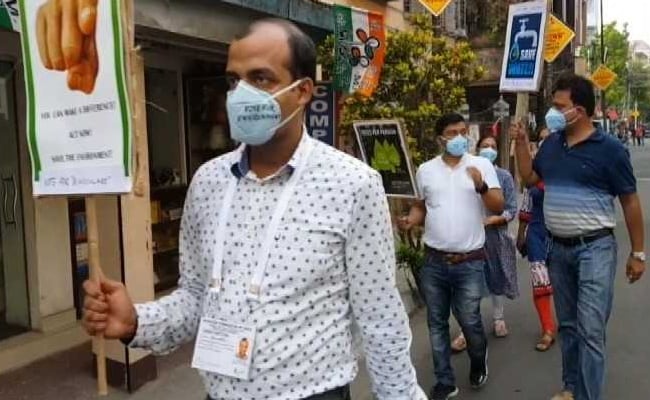 The issues that we are fighting for environment, sustainability, waste management require a lot of foresight, 37-year-old Niraj Agarwal said.

Along with fellow campaigners wearing masks with the message "vote for environment", Mr Agarwal has appealed people to maintain cleanliness in their surroundings starting from clean water to waste management.

Talking about his luck against heavyweights such as TMC's Mala Roy, BJP's Chandra Bose and Congresswoman Mita Chakraborty, Mr Agarwal said, "An outcome should not define the necessity of a movement ...so what if we are a team of 4 and a small group of friends and well-wishers...every single voice matters."

The 37-year-old cyber security expert, who was never truly interested in politics, says he would even have supported a candidate with green mission. But the lack of it on poll pitch propelled him onto the pitch.

While some show him support, others wonder if one man can make a change.

"Can one person help control pollution in India and Bengal? The cars have increased manifold causing pollution and choking our lungs, yet I like your enterprise," says sweetmeat seller Kishan Rao.

Usha Mukherjee from Prince AnwarShah Road says, "The trees are being felled, we aren't getting adequate oxygen, that's why this looks like cause to vote for. I want to support him."

Mr Agarwal knows in a battle of heavyweights his fate is sealed, but still hopes his campaign makes a change in the mindset of 17 lakh South Kolkata voters.

Kolkata Dakshin constituency votes on May 19. Results for the Lok Sabha 2019 elections will be declared on May 23