Safa Sebin, a Class 12 student, stepped up to the challenge, as she walked confidentially onto the stage amid loud cheers and applause, setting up an exchange she would probably cherish all her life. 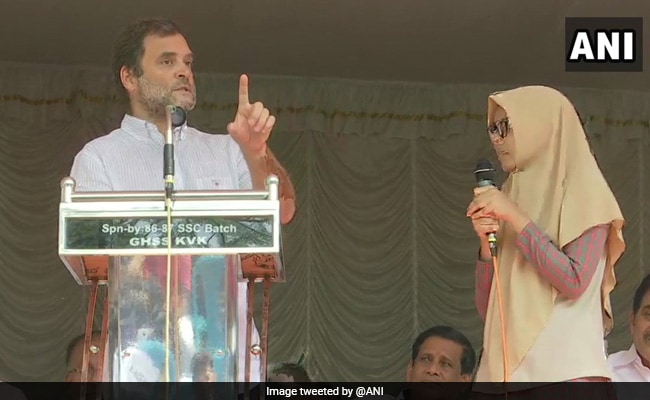 After the speech, Rahul Gandhi thanked Safa Sebin for doing such a good job translating.

Senior Congress leader Rahul Gandhi, while inaugurating a science lab in a school in his parliamentary constituency Wayanad on Thursday, asked students to volunteer for translating his speech from English to Malayalam. "Is anyone willing to translate my speech?" he asked, as his usual translator, party leader KC Venugopal, sat smiling. Safa Sebin, a Class 12 student at a government school, stepped up to the challenge, as she walked confidentially onto the stage amid loud cheers and applause, setting up an exchange she would probably cherish all her life.

As she reached the stage and met Rahal Gandhi face-to-face, Safa's first reaction was to greet him with a namaste. The Congress leader returned her greetings with a warm handshake. He handed a mic to the student and began his speech.

"Let me tell you the essence of science. The most important thing in science is that you need an open mind. Your mind cannot be closed. That means that you have to listen to other people. This means you have to be responsive to other people's ideas," he said in English, promptly translated into Malayalam by Safa Sebin.

The 17-year-old kept covering her mouth with her hand as her friends cheered and applauded for her.

"There is a trend these days in our country that you can hate people and at the same time progress scientifically. This is nonsense," he added.

Mr Gandhi also talked about a recent incident in which a Kerala student died of snakebite in her school. He said as Wayanad MP, he would raise the issue in parliament.

After the speech, Mr Gandhi thanked Safa for "doing such a good job translating".

Talking to NDTV, the thrilled student said it was the best moment of her life.

"This is the best moment of my life. I was only concerned that having volunteered, I must not mess this up. I was shivering as I went onto the stage but Rahul Gandhi calmed me down. He appeared extremely cool," she said.