Kerala has been battered by heavy rain since last week and more rainfall is expected from tomorrow. 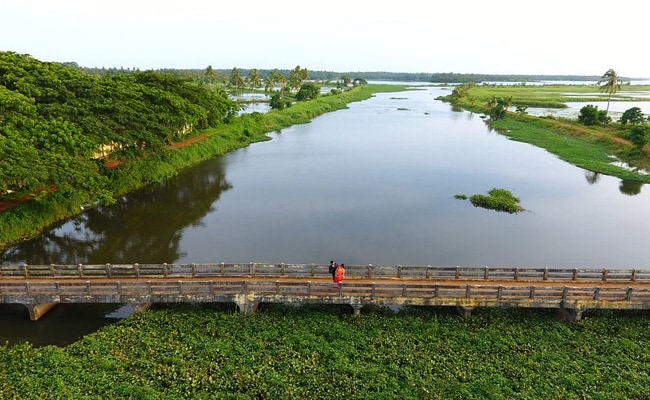 With the rain, flooding and landslides in Kerala claiming at least 27 lives so far, the state police on Tuesday issued an advisory asking people not to jump into rivers to catch fish.

Heads UP !!
A dangerous tendency has been observed to jump into the river to catch the fish when the dam is opened.
We urge the public to kindly avoid such activities.
Stay safe.#keralapolicepic.twitter.com/ez1KuHBzVB

The shutters of the Kaki Ananthodu Dam in the Pathanamthitta district were opened on Monday. Moozhiyar and Maniyar dams have also been opened. The shutters of Peechi, Chimmini, Poomala, Asurankundu, Pathazhakundu and Vazhani dams in the Thrissur district have been opened to prevent flooding.

Chulliyar, Mangalam, Malampuzha, Kanjirapuzha and Shiruvani dams have been opened in Palakkad district. People living on the banks of these rivers and adjoining areas have been advised to exercise caution and be vigilant against rising waters. Some people residing in low-lying areas have also been evacuated to safer places as a preventive measure.

The rain-related incidents have claimed 14 lives in the Kottayam district, 10 in Idukki district, and one each in Thiruvananthapuram, Thrissur and Kozhikode districts, ANI reported.

Nearly 10,000 people have been moved to 247 relief camps across the state. Chief Minister Pinarayi Vijayan has directed that the relief camps should have adequate facilities.

Even as the state braced for another spell of downpour from tomorrow, the India Meteorological Department (IMD) data showed that the southern state has received 135 per cent excess rain during the period from October 1 to 19.

Kerala has received excess rain due to the low-pressure zones that developed near the Lakshadweep coast in the South-Eastern region of the Arabian Sea and the South-Eastern parts of the Bay of Bengal, the weather office said, issuing an orange alert for 11 districts of Kerala indicating heavy rainfall on Wednesday.