How much is the Kerala temple treasure really worth 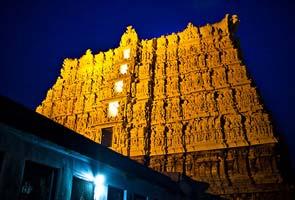 A committee appointed by the Supreme Court of India will return to the vaults of the Sree Padmanabhaswamy Temple in Thiruvananthapuram on the southern tip of India in the second week of February. Their task: try to put a value on what is believed to be the largest temple treasure in the world.

Last July, the world's attention turned to the temple when the committee unearthed what one of its members said was gold, diamonds and precious antiques worth up to $40 billion. The Supreme Court had appointed the committee while hearing a case filed by a former police officer who had alleged that the temple's immense wealth was being embezzled and poorly managed. The committee has recruited experts and marshaled equipment from around the world to resolve the mystery.

But it has not been an easy riddle to solve. Searchers, for instance, have been unable to budge the door of one of the vaults, which is believed to contain a large collection of treasures. The police officer who filed the original case died in July after being ill for several days, fanning fears among some believers that anybody who tried to open the vault would be cursed.

Sree Padmanabha, an avatar of the Hindu god Vishnu who is worshiped at the temple, has a habit of springing surprises. Until a few years ago, most people in the city believed that his image was made of soluble material and that water should not touch it. But when an artist tried to set right an ornament on its hand, it was accidentally revealed that it was made of solid gold and the dark material over it was soot that had accumulated over centuries. Some experts suggested that former rulers had allowed the soot to accumulate to deceive invaders into thinking that the image was not of value. The gold was visible for a few years, but it soon disappeared under fresh soot from the oil lamps.

Sree Padmanabha is greatly revered in this city, which is named after his serpent bed, Anantha. The former royal rulers of Travancore had long maintained that Padmanabha was the true ruler of their kingdom and the rulers were merely his slaves. The deity resides in a sanctum at the center of the temple and is visible only through three narrow doors, one near the head, the second in the middle and the third at his feet. The sanctum is lit by oil lamps, which makes it hard to see him.

Believers are confident no one will dare rob the temple, but the federal and state governments have expressed concern that the discovery of the treasure has made it vulnerable to ordinary thieves and terrorist groups. Uniformed and plain-clothes officers now stand near temple gates that previously were guarded by priests and temple workers. Some secret service agents are dressed in the traditional Kerala waist clothes, or dhotis, with bare upper torsos. Cameras and metal detectors dot the periphery.

There has been a wide-ranging debate about what should be done with the treasure since it was discovered. Some people, including liberals and some leaders of the Communist Party of India, have suggested that the treasures found in the vaults should be sold and the money should be used for the development of the state of Kerala, of which Thiruvananthapuram is the capital. State officials, including Chief Minister Oommen Chandy, have said that the wealth belonged to the temple and should remain there. Some local leaders, including the city's representative in Parliament, Shashi Tharoor, have suggested that rare pieces from the treasure that have artistic and historic significance should be exhibited at the temple under tight security.

Promoted
Listen to the latest songs, only on JioSaavn.com
Some temple officials have told me privately that they believe that the treasure is not as valuable as it has been made out to be. Historians who have studied Travancore say that the temple's wealth traditionally served as an insurance policy against famine. The head of the former royal family, Padmanabhadasa Uthradam Thirunal, who is the custodian of the temple and its treasure, has said little about the value of the treasure or what should be done with it. Before he died, the former police officer T.P. Sundararajan, who brought the case against the royal family, suggested that the treasure be handed over to the state government.

But for now, the debate about what should be done with the treasure have subsided as residents of Thiruvananthapuram await the results of committee's work.