Manju Warrier and her 30-member crew were among the 127 people who were struck in Chhatru area of the tribal district of Lahaul Spiti. 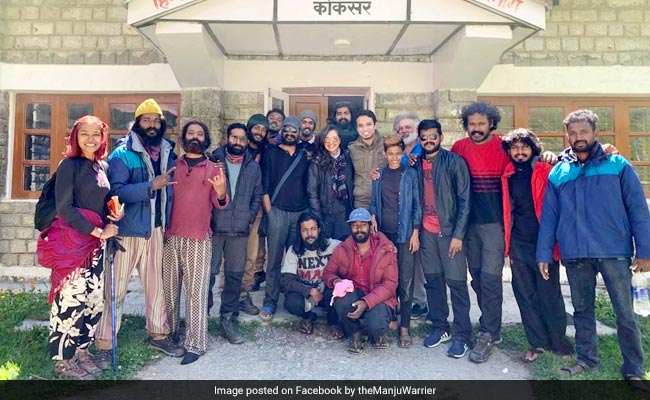 Manju Warrier and the crew were in Himachal Pradesh's Chhatru for a shoot.

Malayalam superstar Manju Warrier and her film crew who were stuck in a remote village of Himachal Pradesh after heavy rainfall and landslides were safely evacuated by the rescue team on Wednesday. The crew had earlier decided to stay back in the village "at their own risk".

"Very happy and relieved to inform all of you that me and the entire team of the movie Kayatta, by Sanalkumar Sasidharan reached back safe by midnight in Manali and are completely safe now after being stranded for six days in the regions of Shiyagoru and Chhatru in Himachal Pradesh due to snowfall and landslides," the film star shared on Facebook with the picture of her and crew.

The actress thanked the people who swiftly and responsibly executed the rescue operations.

"Was shocked to hear about the floods in Kerala. I hope we all stay together in this like last year," she wrote in her social media post.

Ms Warrier and her 30-member crew were among the 127 people who were struck in Chhatru area of the tribal district of Lahaul Spiti.

She was shooting for Malayalam film "Kayyata" in Chhatru when landslide hit Mandi-Leh Highway. The actress managed to call her brother using satellite phone who reached out to junior foreign minister V Muraleedharan for help.

The minister directed the Mandi district administration to be in touch with the crew members.

As many as 63 people lost their lives in the hill state due to heavy rains and flooding in the monsoon season.

The weather department has predicted heavy rain in isolated places for the next few days.