The Kerala State Disaster Management Authority has declared a yellow alert in Ernakulam, Idukki, Thrissur, Wayanad, Malappuram on April 29 and an included additional districts of Kottayam, Palakkad, Kozhikode for the alert on April 30.

In Kerala, Thiruvananthapuram has been facing severe coastal erosion since Wednesday, including destruction of several houses and forcing people into camps. "The reasons are not clear. There was already an alert for the rough sea by Indian National Centre for Ocean Information Services, which should have been over by now... But the depression and cyclones seems to be adding to the swell of the sea", a state official stated.

Cyclone Fani is likely to reach near North Tamil Nadu and south Andhra Pradesh by April 30 evening, according to the Indian Meteorological Department's update. The existing depression, among several other factors, could be adding to the swell in the sea, officials suspect.

In Valiyathura, a coastal fishing village, at least 15 houses have been severely damaged. Simpson's house now has no wall in the front of the house. "I was inside the house and by 11 pm on Wednesday night, I could hear waved lashing and massive crumbling. The wall of my house was completely swept away."

In his neighbourhood, Solomon and his wife Lejithal just finished renovating their ancestral home three years ago. Now, it's left crumbling, with walls and foundation being swept off. "My husband, a fisherman, made this with great difficulty. Now we can't go back. Either the government has to give us a house or compensation and land to build a new one," Lejithal told NDTV. 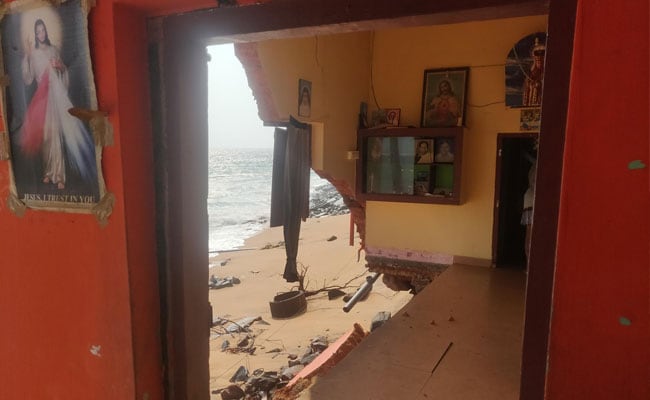 The existing depression, among several other factors, could be adding to the swell in the sea

The Kerala State Disaster Management Authority has declared a yellow alert in Ernakulam, Idukki, Thrissur, Wayanad, Malappuram on April 29 and an included additional districts of Kottayam, Palakkad, Kozhikode for the alert on April 30, when the cyclone is expected to near coast of northern Tamil Nadu and Southern Andhra Pradesh. The agency has also asked people to refrain from night travels between 7 pm to 7 am in hilly terrains.

"Latest satellite imageries and surface observations indicate that a depression has formed over East Equatorial Indian Ocean and adjoining southeast Bay of Bengal and lay ...  about 1140 km east-southeast of Trincomalee (Sri Lanka), 1490 km southeast of Chennai (Tamil Nadu) and 1760 km south-southeast of Machilipatnam (Andhra Pradesh). It is very likely to intensify further into a deep depression during next 24 hours and into a Cyclonic Storm during the subsequent 12 hours," the Indian Meteorological Department's release stated.

"It is very likely to move northwestwards off Sri Lanka coast during next 96 hours and reach near north Tamil Nadu and south Andhra Pradesh coast on April 30 evening," the release further added.

The fishermen have been advised not to venture into deep sea areas of East Equatorial Indian Ocean and adjoining parts of Bay of Bengal, Indian Ocean from April 26 to 28. And have been asked to stay off Sri Lanka, Puducherry, Tamil Nadu and adjoining south Andhra Pradesh coasts on 29th & 30th. Those, who are out in deep sea areas are advised return to the coast by April 28 by the central government agency.

Kerala Plus One Improvement Result 2019 Out. Direct Download Link Here