The state government has been enforcing the three-week national lockdown to keep people in their homes and stop the spread of the highly contagious COVID-19 disease. 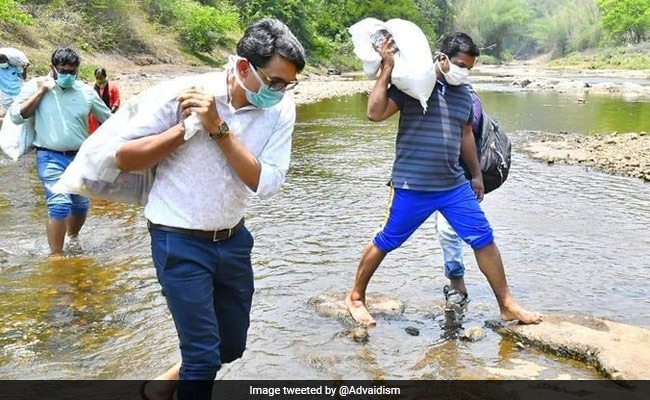 Kerala has been one of the hardest hit states in the coronavirus crisis with nearly 200 cases.

In the midst of uncountable heart-breaking stories of difficulties faced by several sections of society because of the 21-day national lockdown, there are a few inspirational and uplifting reports.

With access to basic necessities hit by the curbs, the MLA and collector in Kerala's Pathanamthitta were seen on Saturday carrying sacks of food supplies to far-flung tribal communities.

In photos shared on social media, KU Jenish Kumar, a legislator of the ruling Communist Party of India (Marxist) and PB Nooh, the District Collector of Pathanamthitta, are seen crossing a creek to reach a tribal settlement.

Located in a forested area, the community of around 37 families was running short on supplies and it took the team over an hour-and-a-half by road and around half-an-hour on foot to reach the settlement.

The man in the rolled-up blue track pants is KU Jenish Kumar MLA of CPM. The one in the glasses is Pathanamthitta District collector PB Nooh IAS.

The team is carrying food supplies to outback communities in the Pathanamthitta district in Kerala. Also to communicate their message pic.twitter.com/9OKFXZhpiZ

Going to these tribal communities, giving them supplies and telling them in person that the Govt is with them is the best Assurance that officials could do.

Both are the Gems of my District. Proud. pic.twitter.com/ggMN9q6DZE

Kerala has been one of the hardest hit states in the coronavirus crisis with nearly 200 cases.

The state government has been enforcing the three-week national lockdown to keep people in their homes and stop the spread of the highly contagious COVID-19 disease.

On Sunday, the state saw hundreds of migrant workers coming out on streets in the Kottayam district, demanding arrangements for returning to their homes.

Chief Minister Pinarayi Vijayan blamed "some forces" for trying to create unrest and forcing the workers to come out to the streets.

The Kerala government deployed police forces and sent administrative officers to pacify the migrant workers, who are called guest labourers in the state, and managed to send them back to their camps.

The Kottayam district administration assured the protesting workers that their food issues would be taken care of but turned down their demand for travel facilities.