Teams of elephants, led by their mahouts, were seen parading since the morning ceremoniously.

Thrissur, Kerala: A famous festival in Kerala's Vadakkunnathan Temple in Thrissur saw lakhs of people participating in the pomp and show on Sunday, prepping for a show of fireworks, days after over 100 people were killed in a fire 200 km away in Kollam.

The Temple authorities have been granted permission to conduct the fireworks display unopposed by locals. But what makes the last day of the Thrissur Pooram more grandiose and even more controversial is a parade by a fleet of 68 elephants, all of them in chains and some of them with visible injury marks.

One of the injured elephants was shown to NDTV by Animal Welfare Board of India. "These mahouts use a black color coat to cover up injury marks because injured elephants are unfit for the parade according to the guidelines," said Dr Rakesh C. 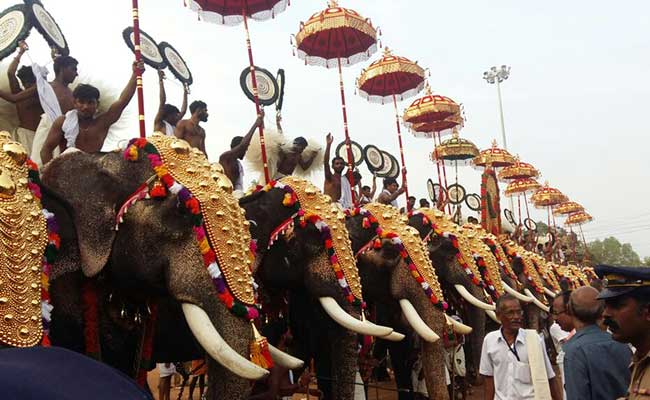 Teams of elephants, led by their mahouts, were seen parading since the morning ceremoniously, in a run up to the grand finale in the evening. The teams compete with colourful umbrellas being exchanged atop elephants.

"We were not even allowed to inspect the elephants. We were clearly stopped even as some veterinary doctors went ahead and inspected. We have a mandate under the Prevention of Cruelty to Animals Act to inspect animals in such circumstances. Last year we saw several discripancies", says Mr Vinod Kumar from AWBI.

A few steps away from the animals, continues the traditional drumming. All of this - more than enough to send the common man in a joyous frenzy - while dangerously close to the elephants at a time when they are subjected to a tough environment of heat and sound.

"You can't compare the two (Kollam and Thrissur)," said Varun K, who has come to witness the festival for the third time. "One could think of scaling it down slightly but it's also about tradition. This is part of every Keralites identity," he added.

The elephants walked in chains with their injury marks clearly visible, a reminder of where they originally belong - to the wild, not as captive thrills. The temple authorities have received permissions for fireworks with a reminder from the High Court that the sound must not exceed 125 decibels.