"The police told us that there is a threat to our life. We have decided to go back but we will return to Sabarimala," Trupti Desai said. 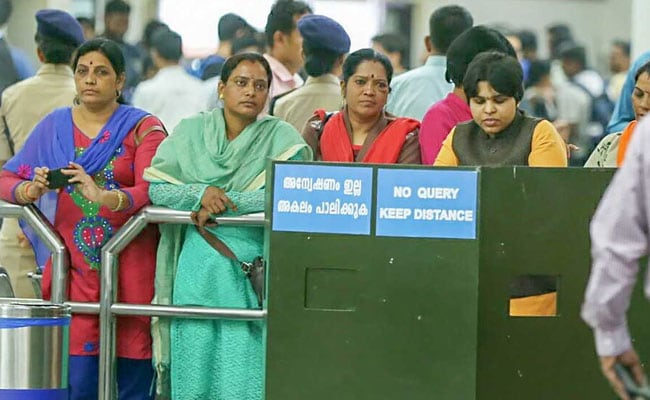 Trupti Desai had tried to enter Sabarimala last year too.

Ending an over 12-hour-long standoff with devotees opposing the entry of women of menstrual age into Sabarimala temple, a team of gender rights activists led by Trupti Desai on Tuesday night called off their decision to visit the hill shrine.

Ms Desai announced the decision to go back to Maharashtra after the police, citing security reasons, denied them protection amid protests by members of a right wing outfit and BJP.

"The police told us that there is a threat to our life. We have decided to go back but we will return to Sabarimala. We will continue our fight," Ms Desai told reporters.

Ms Desai also condemned the attack on activist Bindu Ammini, allegedly by a Hindu right wing activist outside the office of the commissionerate.

Ms reached Kochi early Tuesday along with five others to proceed to the Sabarimala temple to offer prayers. She had said she would leave Kerala only after visiting Sabarimala.

Ms Desai had made an unsuccessful attempt to enter Sabarimala in November last year, weeks after the Supreme Court lifted the ban that prevented women and girls between the age of 10 and 50 from entering the shrine.

As soon as the team of activists landed at the airport in Kochi they went to the city police commissionerate seeking protection to proceed to the hill shrine.

However, police declined to grant protection to them, citing the recent Supreme Court decision to review its 2018 order permitting women of age groups into Sabarimala.

Activist Bindu Ammini, who had joined Ms Desai at the airport, was attacked by a right wing group member using pepper spray when she came out of the office of the commissioner.

Bindu Ammini, who was admitted to a hospital after the attack, has been discharged, her lawyer said.