The Congress was ahead of the BJP as votes were counted Monday for 102 urban local bodies in Karnataka where polls took place last week. This is the first election after the Janata Dal Secular-Congress coalition government took power in May.

In 2,267 of the 2,664 seats for which results have been declared, the Congress has won 966, the BJP wins 910. The Janata Dal Secular has taken 373 seats and the others the rest of the seats. The BJP is leading in the municipal corporation of Shimoga -- the stronghold of its former chief minister BS Yeddyurappa. There is no clear winner in Mysuru and Tumkur.

"We would have won more if it weren't for the coalition government," Mr Yeddyurappa said as his party lagged. "We expected better performance of the party than the present results... Another factor is the money power of Congress and JDS, which BJP failed to match," he added.

The ruling coalition partners did not contest the local body polls together but are expected to come together after the results, if no party wins a majority in any urban body. If they together won more than half of the seats, the two parties are likely to consider it a win as the BJP has a strong presence in urban bodies in the bigger cities.

All three parties are hoping for good results for a boost ahead of the general election next year. 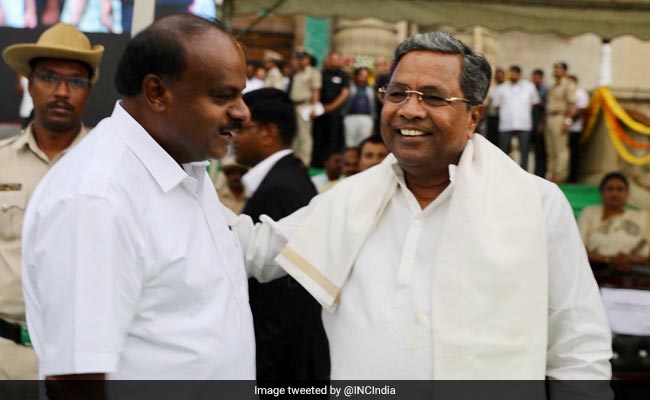 Karnataka urban local body election result: This is the first election after the Janata Dal Secular-Congress coalition government took power in May

Voting in three places in Kodagu was postponed because of rain and flooding in the past few weeks.

Many districts, including Bengaluru, will vote later in the year.

There was a record turnout of over 67 per cent when elections to over 100 city and town municipalities and town panchayats across Karnataka were held on August 29. Elections were not held in Mysuru, Shivamogga and Tumakuru districts as a case on reservation of wards is pending before the Karnataka High Court.

Over 8,000 candidates contested the local body polls and some 800 fought for the three city corporations.