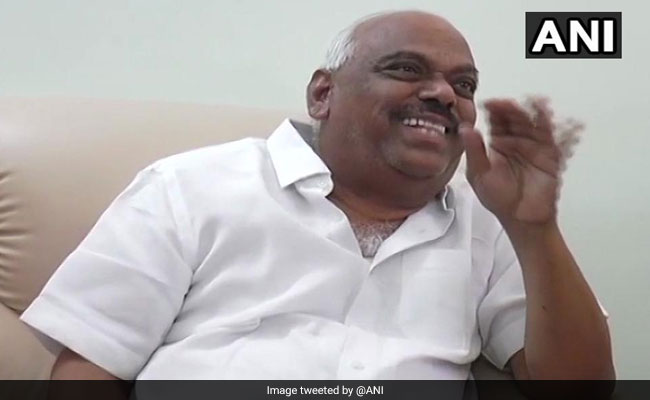 Karnataka Speaker Ramesh Kumar: "I don't sleep with men. I have a legal wife."

A bizarre exchange between two top Congress leaders in Karnataka has once again exposed festering infighting within the party, which has been ruling the state in an alliance since May last year. The two leaders, Ramesh Kumar and KH Muniyappa, have been squabbling over a constituency ahead of next month's national election.

On February, Mr Muniyappa, while denying any tussle with his colleague, had remarked to reporters: "Ramesh Kumar and I are like husband and wife and we don't have any issues."

Ramesh Kumar's comeback to that has raised eyebrows. "I don't sleep with men. I have a legal wife. So he may be interested but I am not," the assembly Speaker told reporters in Bengaluru on Thursday. He has reportedly complained to the Congress leadership against Mr Muniyappa.

Mr Muniyappa had made his comment at least a month ago, at an event in Srinivaspur, a town in the Kolar constituency from where he wants to contest the April-May election.

Ramesh Kumar is also from Kolar. The two have been bickering for long, say state party sources, and the feud has intensified over who will contest from the constituency. Mr Muniyappa, a seven-time Lok Sabha lawmaker, is likely to be the candidate from Kolar this time too, but Ramesh Kumar and other state legislators from Kolar are reportedly against it. They have even appealed to party bosses. They say that Mr Muniyappa is facing anti-incumbency in his constituency, and is also aggressively pushing for his family members as candidates.

Ramesh Kumar is known for his outrageous comments. He had earlier used a rape analogy to describe how he felt about questions raised against him over an audio tapes row. "The situation was like that of a rape victim, as they too are supposedly questioned about the incident repeatedly," he had controversially said. Later he was forced to apologise and expunge his own comments made in the assembly.

The Congress has been trying to bury infighting ahead of the general elections. The ruling coalition, in a bid to put up a united face, said on Tuesday that they would jointly campaign to reduce the BJP to "single digits" in Karnataka.

Both the Congress and Janata Dal Secular leaders vowed to resolve all issues and fight the polls unitedly amid tensions at the local level. The alliance partners have decided to launch their joint campaign on March 31 with a rally near Bengaluru, which is likely to be attended by Congress chief Rahul Gandhi.