A video has surfaced which appears to show this episode. The officer can be seen wiping her tears 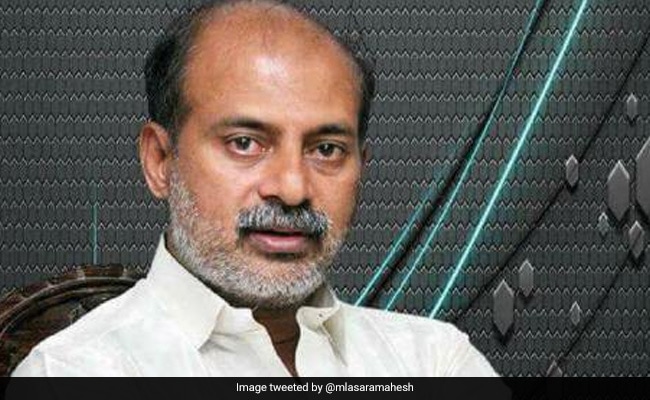 Sa Ra Mahesh is said to have later asked the woman officer not to make a big deal out of it.

A woman police officer in Karnataka was reportedly shouted at by a state minister during the funeral of Dr Shivakumar Swami in Karnataka. On Tuesday, as lakhs had gathered to pay tribute to the late seer who headed the Sree Siddaganga Mutt in Tumakuru, Sa Ra Mahesh, Tourism Minister and a Janata Dal Secular legislator, was allegedly stopped from entering the mutt by Tumakuru Superintendent of Police Divya Gopinath after which he is said to have lost his temper.

A video has surfaced which appears to show this episode. The officer can be seen wiping her tears. Later, Mr Mahesh is said to have asked the woman officer not to make a big deal out of it.

The BJP condemned the reported episode and tweeted, "JDS MLA and Minister Sa. Ra. Mahesh abuses Tumakuru SP Divya. Calls the women police officer "Bloody Rascal". Women officers was spotted crying. Officer had left her unwell kid & reported to work. This is what happens when a party with 38 MLA runs the state."

But the officer herself played down the alleged episode.

"Over 12 lakh people had come for the funeral. There were diversions and some restrictions. Not everybody could go everywhere. We took some decisions for the convenience of everybody. There was no real issue. It was nothing. It was part of this big bandobast," Divya Gopinath told the media in Tumakuru.

She added that she was not upset and it was all part of her job. "It was a very small space and we had to take decisions based on this. So there were these small issues. Even for the devotees in the queue. These small things happen. What was important was that everyone should get the darshan," Ms Gopinath explained.

Massive security arrangements were in place around the mutt to manage lakhs of devotees who had travelled to Tumakur to catch a glimpse of their spiritual leader. Several ministers had also attended the funeral.