Police officers in face masks asked people to disperse from the "We stand with farmers of Punjab" demonstration, warning about COVID-19 curbs on demonstrations. 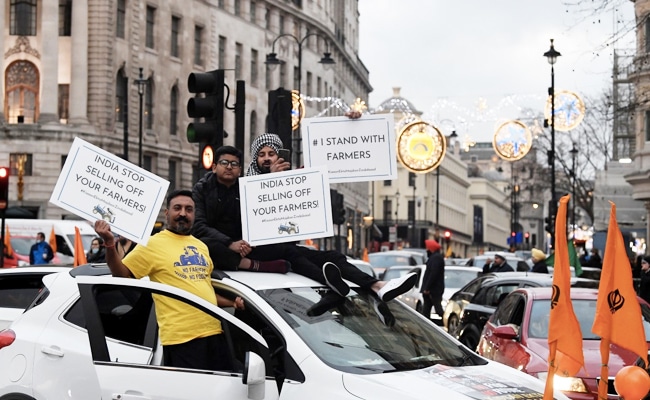 The demonstration, largely made up of British Sikhs, involved placards and slogans.

Thousands of people protested in central London on Sunday over the Indian government's agricultural reforms that have triggered a massive demonstration by farmers. Several people were arrested by the police for violating COVID-19 rules, news agency PTI reported.

A crowd of demonstrators converged on the Indian embassy, located on Aldwych, a major artery in the centre of the British capital, and groups marched around the Trafalgar Square area, a Reuters photographer at the scene said.

Several police officers in face masks asked people to disperse from the "We stand with farmers of Punjab" demonstration, having warned that strict regulations remain in place to help prevent the spread of coronavirus and therefore demonstrations of larger than 30 risk arrests and fines.

The demonstration, largely made up of British Sikhs, involved placard-waving with messages such as "Justice for Farmers" and sloganeering as well as several cars blocking roads. There was little social distancing in evidence and few participants were wearing face masks.

"Our High Commission has been coordinating closely with the authorities concerned and we will, together with them, address the issues that have come up - for example how this gathering of thousands could take place without specific permission," an Indian High Commission spokesperson was quoted as saying by PTI. 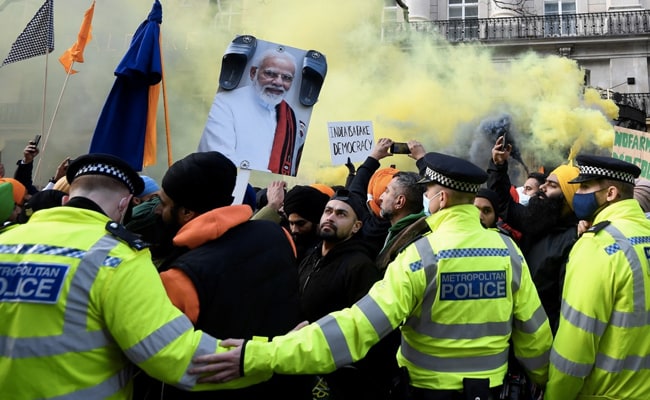 The Indian embassy said the gathering was led by "anti-India separatists".

The High Commission reiterated the government's stance that the protest against agriculture reform bills in India is part of an internal democratic process.

"It is work in progress in our functioning democracy. The government of India is in talks with the protesters which are still ongoing. Needless to say, it is an internal issue of India," the spokesperson added.

The protest comes after a group of 36 British MPs led by British Sikh Labour MP Tanmanjeet Singh Dhesi had written to UK Foreign Secretary Dominic Raab asking him to make representations to his Indian counterpart S Jaishankar over the protests in India.

Tens of thousands of farmers are protesting on the outskirts of New Delhi against three laws the government says are meant to overhaul antiquated procurement procedures and give growers more options to sell their produce.

Farmers fear the legislation, passed in September, will eventually dismantle India's regulated markets and stop the government from buying wheat and rice at guaranteed prices, leaving them at the mercy of private buyers.

Britain is home to a large Indian community and many Britons who trace their family roots to India are strongly engaged with news from the country.