"The government has to take responsibility," said the London-based 27-year-old junior clinical fellow within the NHS. 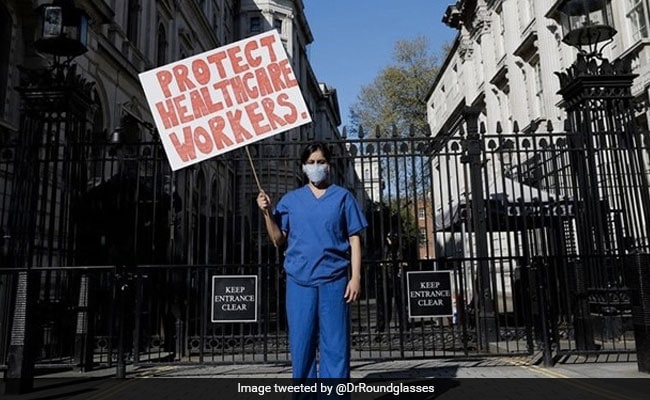 A pregnant Indian-origin doctor has staged a protest outside British prime minister's office at 10 Downing Street against the persistent shortage of personal protective equipment, mainly surgical gowns, for the UK's National Health Service medics amid the coronavirus lockdown.

Dr Meenal Viz, who is six months pregnant, dressed in hospital scrubs and a surgical face mask held a placard reading "Protect Healthcare Workers" at the gates of Downing Street on Sunday as the critically short supply of the personal protective equipment (PPE) for the National Health Service (NHS) workers fighting the COVID-19 outbreak have caused widespread concern.

"The government has to take responsibility," said the London-based 27-year-old junior clinical fellow within the NHS.

Her protest came as the British Medical Association (BMA), the leading doctors' union, enhanced its ongoing campaign to raise concerns around doctors and nurses in many NHS Trusts facing a severe lack of PPE as the government admitted a crucial delivery from Turkey expected over the weekend has been delayed.

"For doctors and healthcare staff working on the front line now and in the coming days, the announcement that the expected arrival of PPE from Turkey has been delayed for an indefinite time is extremely concerning," said Dr Chaand Nagpaul, BMA Council Chair.

"Healthcare workers desperately need proper and effective protection now - by whatever means possible. Far too many doctors are already placing themselves at considerable risk by simply doing their job of caring for patients, as a recent survey by the BMA worryingly found that significant numbers are still without the equipment they need," he said, adding that the issue "really is a matter of life and death".

The consignment of PPE from Turkey is expected to include 400,000 gowns, as Chris Hopson, chief executive of NHS Providers, revealed that some hospital trusts already had shortages of the gowns, a critical piece of clothing to protect the doctors and the coronavirus patients they treat.

"Bitter experience over the last few weeks has shown until a consignment of gowns has actually landed - that the boxes have been checked and the equipment''s been tested - the NHS simply can't count on the gowns being available at the frontline," said Hopson, who revealed that often boxes have been mis-labelled and left Trusts short of specific equipment despite deliveries coming in.

Meanwhile, Public Health England had changed its advice recently to allow the NHS to reuse gowns if stocks are running low, saying "some compromise" was needed "in times of extreme shortages".

It asked staff to reuse "(washable) surgical gowns or coveralls or similar suitable clothing (for example, long-sleeved laboratory coat, long-sleeved patient gown or industrial coverall) with a disposable plastic apron for AGPs (aerosol-generating procedures) and high-risk settings with forearm washing once gown or coverall is removed".

The guidance also said hospitals could reserve the gowns for surgical operations and procedures, which were likely to transmit respiratory pathogens.

However, doctors' and nurses' groups had raised concerns that the new guidance had been issued without proper consultation.

The UK government has said there is an "enormous strain" on the supply system for PPE but that "every resource of government" is being deployed to expand supplies.

British doctors and health workers have continuously raised the alarm about a lack of sufficient protective kit to treat potential coronavirus patients, potentially exposing themselves and putting vulnerable patients at risk.

Globally, more than 165,000 people have died and over 2.4 million people have been infected by the coronavirus, according to data maintained by Johns Hopkins University.