Over 5,000 Indian-Americans Cheer For Donald Trump 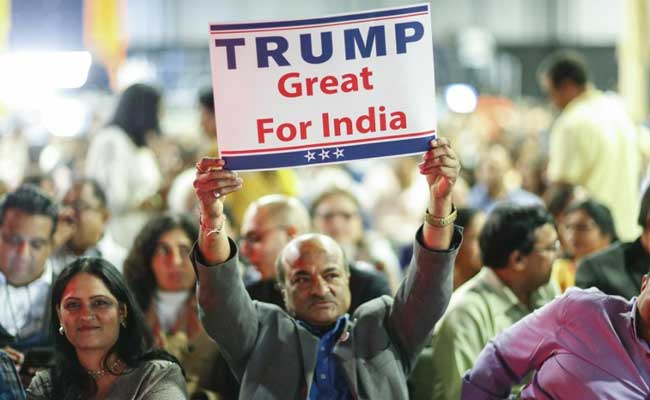 Edison, New Jersey: Voicing support for Donald Trump's pledge to fight terrorism and boost economy, over 5,000 Indian-Americans gathered in Edison for a charity event that was attended by the Republican presidential nominee and included performances by Bollywood celebrities.

Bollywood music and performances by artists preceded the nearly 13-minute appearance by Trump at the event yesterday at the New Jersey Convention and Expo Center.

Over 5,000 people, including the elderly and children, attended the nearly 5-hour event organised by the Republican Hindu Coalition, founded and chaired by Indian-American industrialist Shalabh Kumar, Chairman and CEO of the AVG Group of Companies.

The event, focussed on the theme of 'Humanity Against Terror', was rich in Indian entertainment, with celebrities Prabhu Deva, Shriya Saran and Sophie Chaudhry enthralling the audience with their performance.

The event began with a video of actor Anupam Kher who spoke about the plight of the Kashmiri Pandits who were forced to flee their homeland. The event was organised with a special focus on the Kashmiri Pandit terror victims and the Bangladeshi Hindu victims.

A few Trump protesters too had gathered outside the venue at the start of the event holding banners against the 70-year- old billionaire tycoon.

Indians and Indian-Americans turned out in large numbers to show their support for Trump, carrying placards that read 'Trump Make America Great Again', 'Trump for Hindu Americans', 'Trump Great For India' and 'Trump for Faster Green Cards'. Dressed in traditional Indian finery, the audience broke into a loud applause and cheer as Trump came on stage against the backdrop of the American flag.

Trump, who was joined on the stage by Kumar and his son, lit the traditional Indian lamp before addressing the crowd. Trump too cheered the crowd, waving and clapping as he paced the stage and said "we love the Hindus, we love India," before leaving.

The crowd stood on chairs and made a beeline towards the stage area to see Trump up close and take pictures. The crowd constantly cheered for Trump, who spoke for about 13 minutes, vowing to make India and the US "best friends".

The people also broke into applause as Trump outlined his vision to take India-US bilateral relations to greater heights under a "Trump administration".

In a video message, Senator Newt Gingrich described Kumar a "good friend" who has worked for the "best interests" of India and US. He said the Republican Hindu Coalition is a very important building block for the future of America.

Himesh, a local resident, said Trump will improve America's relations with India, particularly in the area of economy and business.

He, however, noted that Trump's speech was "very generic and not very detailed" but described him as a "very positive" person who has the potential to do something if he has a "good core team around him".

Himesh said the crowd enjoyed seeing Trump and "may have won a few more votes" here.

Kamaljeet Singh, an enthusiastic Trump supporter from Edison, said he supports Trump's policies on defeating terrorism and boosting the American economy by ensuring that jobs go to the American public and "are brought back from China".

"Trump is the best candidate to become the US President. Terrorism and economy are the main issues for me and for a majority of the American public. I support the solutions he has offered to tackle both issues," Singh said as he criticised Democratic nominee Hillary Clinton and her husband former Bill Clinton for the way they have worked in Washington.

Holding a placard 'Trump Make America Great Again', Singh said Trump is a businessman and knows how to create jobs and "bring jobs back from China".

Singh said Trump is the "strong voice" that is needed to combat terrorism and to boost economy. He added that a Trump presidency will be good for India as well.

"Economy and terrorism are the two main concerns for India as well and a Trump presidency will work with India to tackle the issues," he said.

Suhas Kedari from Edison echoed the sentiments, saying for the common man, economy and terrorism are the two main issues that impact daily life.

"Trump is the strong candidate who can deal with the problems facing us -- which is terrorism and jobs and economy," Kedari said.

He said Clinton has been in public service for 25-30 years "but has not done anything" to solve the concerns of the common public.

"We need someone different now, a non-politician to run the country. Trump is a much stronger candidate than Clinton," he said.

Most supporters said while they do not condone Trump's remarks against women, they said job creation and fighting terrorism are critical issues for the common citizen.

Kamal from Hackensack said the American election is at a "very interesting" point and both Clinton and Trump are running neck to neck for the presidency.

He said the backlash Trump is facing for his remarks against women is understandable and Clinton will get an edge over Trump due to this.

However, there were some among the gathering who said they do not support Trump.

Charan Bajwa from Princeton, accompanied by her young daughter, said the political environment in America has become "very disturbing and frustrating".

"What is most important for the country is to have somebody with good character to lead the country and someone we can look up to as president. Policies are aside. I may agree with a lot of Republican and Democratic policies but the country must be led by somebody of character. Trump is a reality TV show guy," she said.

Promoted
Listen to the latest songs, only on JioSaavn.com
Trump's appearance was followed by performances by Saran and Chaudhry and other celebrities from India.

The crowd cheered and applauded as the celebrities danced to popular Indian songs, performing a grand finale on the foot-tapping 'Jai Ho'.